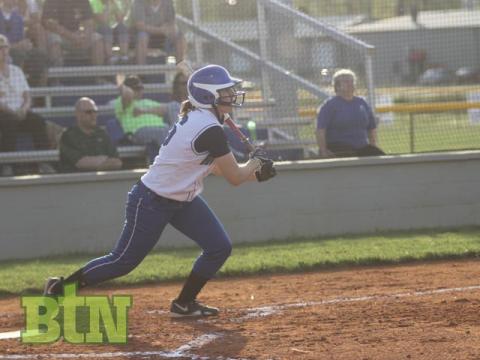 The weekend of May 4-5 saw the Butler County High School softball team battle both opponents on the field and the weather at the Sports Warehouse Catholic Classic hosted by Owensboro Catholic High School.  Nevertheless, the Bears were able to play five games in two days, picking up wins against Owensboro (6-3) and #5 Christian County (6-4), while losing to #1 Allen County Scottsville (2-0), South Spencer, IN (2-0), and #11 Louisville Male (2-1).

An Amy Rogers grand slam in the fourth inning proved to be the difference in the Bears' 6-3 win over Owensboro on Friday night.  Hannah Peach, Morgan Manning (RBI), Jazmin Reynolds, and Emily Rich all singled.

"This was a good win for us since we had lost to Owensboro earlier in the year," said BCHS coach John Embry.  "It was good to get a little revenge."

Butler County and #1 Allen County-Scottsville were scoreless going into the bottom of the fifth before the Patriots plated two runs to take the lead.  With All-State pitcher Kesli Pardue in the circle, that proved to be enough for ACS.

In a solid pitching performance, Manning allowed six hits and two earned runs in seven innings against the #1 team in the state.  She struck out two batters and hit one.

"We played well against a strong team," said Embry.  "We had a couple of chances to score but just couldn't get the hit when we needed it."

* * *
Butler County faced off against South Spencer (IN) on Saturday in its final pool game.  It proved to be a disappointment as the Bears fell 2-0 in a sub-par performance.

Butler had only two hits - singles by Drake and Rich. Manning allowed four hits and one earned run.  She struck out two batters, walked one, and hit one.

"We didn't come ready to play in this one," said Embry.  "I feel like we were the better team but we didn't show it on the field, especially offensively."

Coming off a not-so-good outing against South Spencer, the Bears rallied and turned in one of their better offensive performances of the year in a 6-4 win over a good Christian County team.

The Bears turned in five hits against solid pitching - all singles - by Drake (2-RBI), Rich, Manning (2-1B, RBI), and Kassie Phelps  - but they were timely hits with runners in scoring position.  Allie Howard also had a RBI.

* * *
The win over Christian advanced the Bears to the semifinals against Louisville Male. In a strong pitching performance by Morgan Manning, the Bears held hard-hitting Male scoreless through five innings.  Butler took the lead in the fifth on an RBI-single by Amy Rogers, who scored Allie Howard, who had also reached on a single.

A solo home run by Male in the fifth tied the game at 1-1.  Male singled up the middle in the bottom of the 6th to score a runner from second to take the 2-1 walk-off win in a game that was shortened by time.

"This was another solid outing for us," said Embry.  "We played one of our better defensive games of the year and Morgan did a great job for us in the circle."