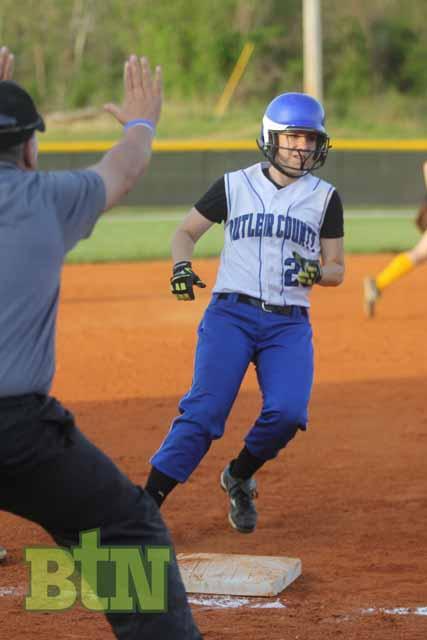 Last week marked the beginning of all-important district competition with Butler County squaring off against Trinity twice and Grayson County once.  The Bears defeated the Lady Raiders 10-0 on Monday and 5-4 on Tuesday, before falling 7-1 to Grayson County on Thursday.

Pitcher Morgan Manning struck out six batters, walked one, and gave up eight hits in the win.

Tuesday's game at Trinity was a different story but the Bears still came out on top with the 5-4 win.  Butler County started with a quick 2-0 lead in the second inning but the Lady Raider rallied with three runs of their own in the bottom of the third.  The Bears responded with three more runs in the 5th inning to take a 5-3 lead.  Trinity threatened in the bottom of the 7th inning, scoring one run and having runners at second and third with two outs.  Drake recorded the final out on a ground ball to short to preserve the win.  Drake, rightfielder Alex Embry, and second baseman Natoshia White made key defensive plays in the late innings to keep Trinity from scoring.

Drake, White (2), Manning, Peach, Jazmin Reynolds (RBI), and Grubb all had singles; Rogers, White and Peach each recorded a double with an RBI.

Manning allowed six hits and three earned runs in seven innings.  She struck out three batters, walked one and hit one.

Grayson County came to Morgantown on Thursday and left town with a 7-1 win over the Bears.  The Lady Cougars used 11 hits in the win as Butler's bats were limited to six hits scattered across several innings.

Drake, White, Manning (2, RBI), Embry and Grubb each had singles.  Collectively, Butler County struck out 9 of 27 "at bats."

In game two, the JV Bears blistered the ball for 16 hits.

Cade, Embry (3), Peach, Rich, Howard, Fry, and Sarah Johnson all recorded singles for the Bears. Peach, Callie Cardwell (2), and Fry (2) all had doubles. Hitting triples for the Bears were Peach and Rich. Embry, Rich, and Cardwell all had 3 RBI, Peach and Johnson added two apiece while Fry had one.

Pitcher Natoshia White allowed three hits and had five strike-outs in the win.