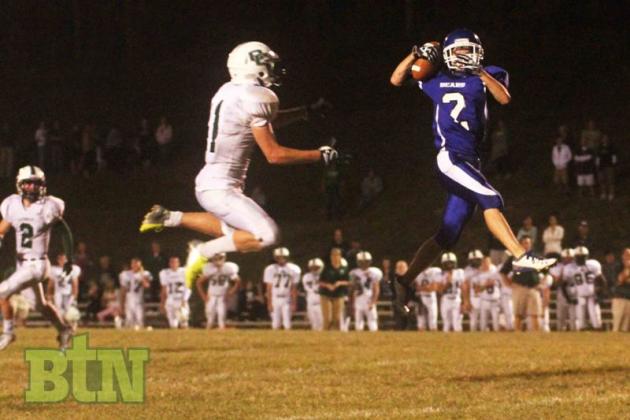 An Owensboro Catholic touchdown with only four seconds remaining in the first half proved to be a momentum game changer on Friday night as the Aces cruised in the second half to a 45-0 win in Morgantown over Butler County.  Though a lopsided score in the end, the game was competitive throughout as the Bears threatened to score multiple times but, nevertheless, weren't able to find the elusive end zone.  Turnovers, penalties, and poor field position hindered the Bears' scoring efforts for much of the game.

Butler County moved the ball early on as pass completions from quarterback Elijah Flener to Kory Johnson, Zeke Woodcock, and Drake Embry moved the ball upfield.  A mishandled snap and a strong Catholic blitz pushed the Bears back near their own goal line, forcing a punt by Jake Martin.

The Aces got on the board on their next possession.  Moving from the Bear 36-yard line, Catholic scored a few plays later on a flare pass to a running back.  The point-after-touchdown (PAT) was good, giving the visitors a 7-0 lead with 5:14 remaining in the first quarter.

In what would become routine, the kicker for the Aces put the ball in the end zone for the touchback.   After both teams traded possessions, the Bears' offense got found some momentum in the waning moments of the first quarter.  Starting on their own 15-yard line, Flener scrambled for a 33-yard gain to give the Bears some breathing room.  Pass completions from Flener to Walker Weathers, Drake Embry, and Matt Moore moved the ball toward mid-field.  A pass from Flener intended to Embry was incomplete, setting up a fourth down.  Flener, on the keeper, came up just inches short of the first down.

Catholic struck again in the opening moments of the second quarter leading to a quick touchdown.  The PAT made the score 14-0 with 11:10 in the first half.

Midway through the second quarter, each team traded interceptions - Jacob Richmond got the pick for Butler County.

The Bears started moving again with 7:50 left in the first half. A short run by Jake Martin was followed by an 11-yard pass completion from Flener to Dylan Havens.  Later, Flener found Woodcock as the Bears' offensive line stepped up.  A pair of quarterback keepers by Flener and another pass completion to Havens across the middle continued the drive.  But, an errant pass was deflected and intercepted by Catholic at 4:34.

An untimely holding penalty helped stop the Bears' on their next possession.

Catholic added a field goal with a little over a minute to play in the first half to make the score 17-0.

Butler County could get nothing going on its next possession — going three-and-out.  Catholic would take advantage of the opportunity, finding the end zone on a third-and-ten from the Bears' 15-yard line with only four seconds left in the first half.  The PAT made the score 24-0 at the break.

A big kick return by Drake Embry early in the second half gave the Bears another scoring opportunity but an Aces interception on a deflected Flener pass.  Catholic returned the turnover on the next possession with a fumble.

Later in the third, the Aces added another touchdown to make the score 31-0.

Embry had another good kick return up to near midfield but the Bears weren't able to get anything going.

Flener teamed up with Matt Moore for a couple nice pass completions. The Bears got inside the Catholic 20-yard line but the drive stalled.

The Aces roared back with a 66-yard touchdown pass/run on their first play, making the score 38-0 after the PAT.

Butler County's last and best scoring chance came early in the fourth quarter.  Flener connected with Weathers for a 16-yard pass completion.  The Bears worked the ball all the way down to the Aces' 6-yard line for a first-and-goal.  Flener was stopped short of the goal line on first down, a BC penalty pushed the Bears back.  Flener almost reached the end zone again on third down but came up short.  Facing a fourth-and-three, Flener's pass across the middle intended for Woodcock was incomplete.

A few plays later and after a 50-yard pass play, the Aces scored again.  The PAT was good, making the score 45-0, the final margin of victory.  After a 42-point differential, a running clock is put into effect, which means the final 9:27 ticked off essentially without interruption.

Butler County (4-2) will be back in action Friday night at home against Union County, another district foe.  Kick-off is set for 7 p.m.

Submitted by Kim Cunningham (not verified) on Thu, 27/09/2012 - 8:52pm
Love the pictures...adds a cool touch--- especially Dylan appearing to be flying through the air while catching the ball.