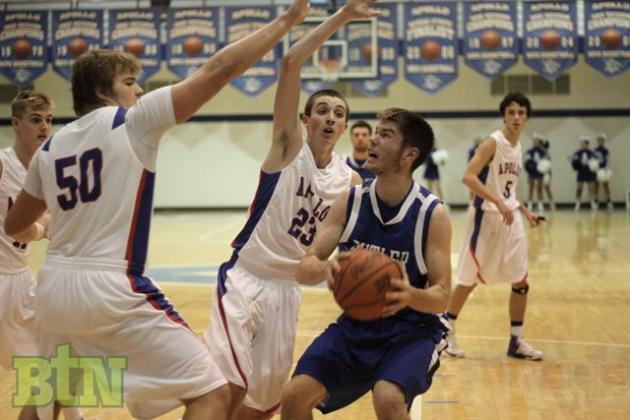 The Calvin Dockery era began last night as the Butler County Bears' basketball team traveled to Owensboro to face the Apollo Eagles in a Third Region matchup.  Unfortunately, the Bears were unable to stop the Eagles - perhaps the best team in the region - falling 77-42 in the season opener for both team and Coach Dockery's first as head coach.

Butler County started guards Brandon Thomas, and Zeke Woodcock; forwards Elijah Flener and Alex Hall, and center Trevor Jenkins.  The Bears fell behind early in the contest and were never able to make up the difference.  Butler's first points came on a pair of free throws by Trevor Jenkins.  From that point the Eagles ran up 12 consecutive points to take a 14-2 lead.

Baskets by Jenkins and Woodcock cut the deficit to 14-6 by the end of the first.  Apollo took command of the game in the second quarter, racing to a 26-8 advantage and prompting a Butler County timeout.  Butler County trailed 32-14 at halftime following a three-pointer by Alex Hall at the buzzer.

A pair of baskets by Woodcock, free throws and a basket by Flener, a jump hook by Jenkins, and pair of free throws by Thomas came toward the end of the third period but defensively the Bears weren't able to stop the Eagles.  Apollo outscored Butler 22-13 in the third to lead 54-27.

A running clock for much of the fourth quarter helped put the game out of reach for Butler County as Apollo cruised to a 77-42 win.

Butler County was led in scroring by Zeke Woodcock and Brandon Thomas with nine apiece.

The Bears shot 23 percent from the field.

The game was broadcast live on WLBQ 1570 AM in Morgantown.  Zeke Woodcock was named the BtN/WLBQ 1570 AM Player of the Game for his performance. Carol Brown was named the WLBQ "Loyal Listener" for tuning into the game.

Butler County (0-1) will be back in action on Friday night in a 12th District boy-girl doubleheader at home against Grayson County.  The girls will tipoff at 6 p.m. with the boys game to follow.