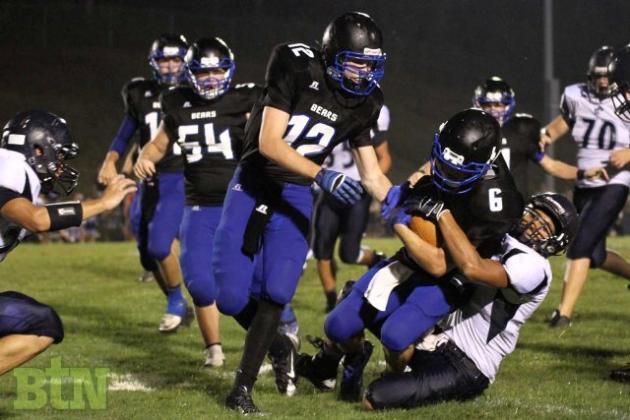 Fueled by six interceptions and a large home crowd, the Butler County High School Bears football team walloped visiting neighbor Logan County 47-0 on Friday night in Morgantown. Butler County took control of the game from the start and had racked up enough points in the third quarter to enact a running clock.

The Bears kicked to start the game and were charged with an offsides penalty on Logan's first snap.  However, Butler's fortunes quickly improved as freshman defensive back Rex Henderson snatched the first of six interceptions the Bears' secondary would get on the night.  Henderson took the ball 46 yards for the touchdown at 11:03 in the first quarter.   The point-after-touchdown kick (P.A.T.) failed but the Bears led 6-0.

Logan began its second series with what it hoped would be a successful air attack.  The Cougars did manage a couple of completions but were forced to punt on fourth down.  A nice return by Butler's Bryce Shanklin gave the Bears good field position at the Logan 30-yard line.  But, a second down fumble ended Butler's scoring chances.

The Cougars responded with two good-yardage pass completions — one from quarterback Joseph Olliges to Michael Syndor and the other Layton Morgan.  At this point, the Butler County defensive line stepped up its pressure on the Logan County quarterback to stop the drive and force a punt.

B.C. Quarterback Shanklin hit Kory Johnson on a first-down quick slant to gain 27 yards.  The Butler County air game fouled its mark in this offensive series as Shanklin connected with Johnson (again), and Zeke Woodcock to drive the ball deep into Cougar territory. Facing a fourth-and-one from the Cougar 10-yard line, senior halfback Walker Weathers took the ball off right tackle into the end zone at the 4:05 mark in the first quarter.  Shanklin found Woodcock for the two-point conversion to give the Bears a 14-0 lead.

Logan's offense moved the ball on its next possession as a completion to Syndor and runs by Jarrett Hamilton and Brennan Rostampour gave the Cougars a couple of first downs.  But, strong tackles by junior lineman Peyton Bratcher and Shanklin, along with the secondary coverage of Martin, Woodcock and junior Drake Embry, slowed the Cougars' drive.  With 2:28 left in the first, Logan attempted to draw Butler offsides on a fourth-and-one play.  The Bears' defense didn't bite, though the Cougars did pick up enough for the first down on a short run up the middle.  From the Bear 20-yard line, Logan had a key pass completion from Olliges to Kaleb Coursey that took the ball inside the 5-yard line.  On second-and-goal from the 3-yard line, Zeke Woodcock stepped between the ball and  an intended Logan receiver for the interception.  Woodcock returned the ball up past mid-field.

Defensive linemen Connor Reed, Dakota Merrick, and Hayden Hampton, along with a hard hit by Shanklin on the Cougar quarterback, as well as good coverage by Caleb Deweese, helped to stop Logan's next offensive drive.

On third-and-ten, Jake Martin snatched an errant Cougar pass at the 7:52.

Butler quarterback Burns connected with Weathers for a 24-yard gain on first down.  Running back Cody White picked up six yards on a draw play.  But, the Bears' offense faltered this time around and had to punt.

However, Butler's defensive backs once again stopped Logan County as Caleb Deweese got the interception and took the ball from the Butler 40-yard line to inside the Logan 3-yard line.  A 20-yard gain by Weathers created a first-and-goal from the 4-yard line.  Butler dodged the bullet as a first-down fumble was recovered for a loss by senior lineman Michael Cortez.  A short completion from Burns to Moore took the ball to inside the 5-yard line.  On fourth-and-goal, a Burns pass to Woodcock in the end zone was incomplete, forcing a turnover on downs.

With Logan pinned against their own goal line, the Bears' defense took advantage of the opportunity with Woodcock making a tackle in the end zone for the 2-point safety to make the score 22-0 Butler County with a little over four minutes left in the first half.

Butler County found the end zone again at 3:16 on a third-and-long pass from quarterback Shanklin to receiver Matt Moore across the middle.  The conversion attempt failed but the Bears extended their lead to 28-0.

A deflected Logan County pass ended up in Rex Henderson's hands but the Bears were whistled for offensive pass interference.  But, a few plays later, Bryce Shanklin picked another Logan pass (5th of the half for the Bears) — this time a new freshman quarterback - and retuned the ball over 50 yards.  However, the clock expired before the Bears could reach the end zone.  Butler led 28-0 at halftime.

Butler County took the second half kick-off and quickly found the end zone.  On second down, Shanklin hit Brooks for a 40-yard touchdown pass at 9:52.  The conversion failed but the Bears led 34-0.

Another Woodcock interception at 8:58 (#6 on the night for the Bears and Woodcock's second) led to another score.  Burns completed passes to Embry and Deweese to move the ball downfield.  Following a short run by Cody White, Burns passed to Moore for the 10-yard touchdown pass at 7:50.  The P.A.T. by Kory Johnson was good, giving the Bears a 41-0 lead - surpassing the 36-point margin needed for a "running clock" - football's version of a a "mercy rule."

With a new offense in the game, quarterback Rex Henderson completed a pair of passes to receiver Ian Embry to move the ball near the Cougar goal line.  Henderson scampered two yards to the end zone on a first-and-goal keeper with 5:57 left in the game, giving the Bears their final margin of victory at 47-0.

Butler County players were obviously excited about the win against Logan.

"The win was a great way to start the season off but there's still a lot of things we need to improve on to get to where we want to be," said Drake Embry. "The crowd was great the entire game and helped us out a lot."

Zeke Woodcock echoed Drake's comments and also talked about the need to improve.

"To start a season off with a win is always a good start but that wasn't the most important thing. Even though we won there are still things we need to work on and get better at," said Woodcock.  "We have to get into the mindset of never being satisfied and to strive for perfection. But that game is behind us and we need to prepare for the next one."

Woodcock added, "As for the crowd, it's always great to have everyone out to support us; it just makes you more hyped every play."

"I thought we played great.  It shows when you do the little things right you get the job done," said Kory Johnson. "Returning as a junior this year I kind of have my own shoes to fill from last year; it feels great to kick off the season with a big win and let's look forward to Russellville,"said Johnson.

The Russellville match-up looms large on the horizon for the Bears.

"No doubt in my mind, if we show up to work each and every day at practice we will move to 2-0," added Johnson, who was also excited about the large B.C. crowd in attendance. "The crowd was great last night.  Nothing gets me more ready for kick-off then walking out of the locker room and seeing the stands packed because I know when the ball is in my hands all eyes are on me and they are behind me all the way," said Johnson.

"You've got to be hungry to win … that's what it boils down to. We were tonight and it was obvious on the field.  That's what we've got to have each and every day," said Emmick.

Emmick told his players to enjoy this night and the win but to come back Monday ready to get to work.

"We're (coaching staff) going to be in a bad mood again, we're going to push you a little harder, and we're going to make you better," said Emmick, who emphasized that his team had two weeks to prepare for a strong Russellville team, which will begin Saturday morning with breaking down game film.

Butler County (1-0) will have their bye week next Friday but will return to action on Friday, September 6, against Class 1A power Russellville.  The Russellville game will be the Bears' football homecoming.  Kick-off is set for 7 p.m.

This sports coverage is brought to you by the sponsors of the 2013-14 BC Sports Package with WLBQ/BtN. We are grateful for their continued support of Butler County student-athletes.

The following are 2013-14 BC Sports Package Sponsors:

- Butler County Board of Education