My DAR Patriot by Ann Bartholomew 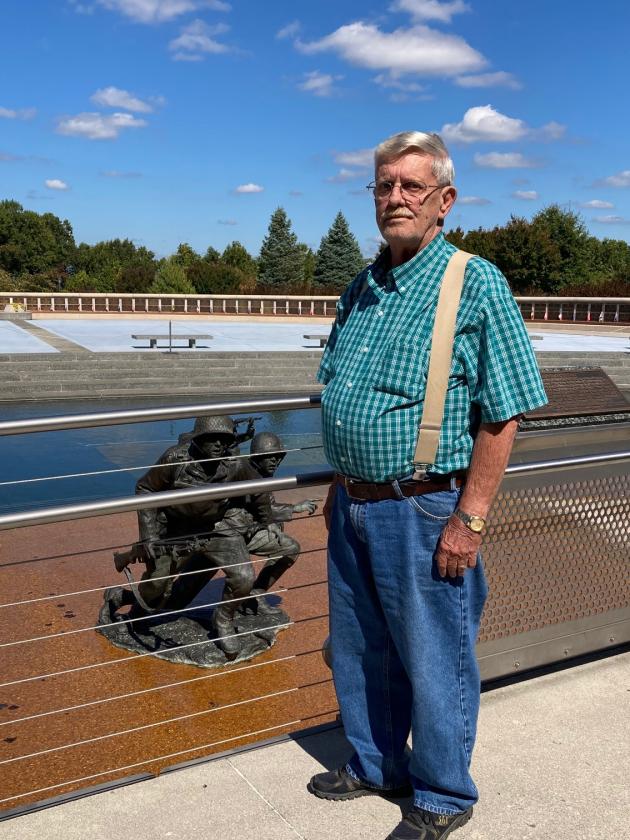 Dean Bartholomew was born to Glen and Marjorie Bartholomew January 27, 1949.  He was the fifth of six children and was welcomed by four older sisters.  The sixth child in the family was born a few minutes later – his twin brother Don.  The family lived in rural northern Missouri.  They were crammed into a small house in the farming community.  The children all attended a two-room school for the first few grades.  Dean always said they couldn’t get into trouble because the teacher was their great-aunt.  Word of any misdeeds would have gotten to Mom and Dad before the boys got home.

By the time the boys entered middle grades the family had moved to Salisbury, MO.  That was followed a few years later with a move to Fayette, MO, where Dean and Don graduated from high school in 1967.

As was the case with all young men at the time, Dean received his notice to register with the selective service board (commonly known as the draft board) at their eighteenth birthdays.  This came in January before he was scheduled to graduate from high school in May.  Knowing he would be drafted with little choice of service, Dean enlisted in the Army.  He was inducted in March 1967 and was allowed to finish high school before reporting for duty.

Basic training for Dean was at Ft. Leonard Wood in southern Missouri.  It was called “Ft. Lost in the Woods” because of the landscape and isolation of the area.  After basic training, Dean served as an instructor in the carpentry course.  His father was a carpenter by trade, so Dean’s experience helping his dad growing up made him a natural for this.

In December 1967, Dean was assigned to duty in Germany with the 283rd Engineer Battalion.  He worked with Company D Operations.  While stationed in Baumholder Dean was able to use his off-duty time to travel around Europe.  He bought a 1950 Mercedes for his travels.  The plan was to ship it home when he left Germany, but it was sideswiped by an Army truck the day before it was to be shipped!  Dean enjoyed his travels in Europe but received anti-American sentiment in France and Spain.

June 1, 1969, Dean reported for duty in Viet Nam.  He would remain there until he was separated from the Army June 1970.  He had to get home in time for his twin brother’s wedding the end of June.  Dean soon learned General Sherman’s immortal words “war is hell” were sadly true.  Insects, snakes, fungus, boils, etc., were all a part of the lack of hygiene in the hot and humid country.  Long term friendships were hard to maintain as life was often quite short there.  The Vietcong armed children with weapons and instructed them to shoot at soldiers.  Our service men never knew if the weapon was real or not.  Dean was theoretically in the Army Engineers, but he did missions for Army Intelligence all over the Northern District.  He and his fellow soldiers were told that if taken prisoner while on these missions they would receive no help.  That is pretty stark for men who are not yet old enough to vote.

Before coming back to the United States at Travis Air Force Base, California, returning soldiers were cautioned not to wear their uniforms in public.  Anti-war sentiment was so strong, it might have been dangerous to dress as soldiers.  This was a demoralizing situation as every single person on that flight had risked their lives in service to their country.

Dean and Ann were married November 7, 1970.  He used his Army Operations experience in banking jobs, but eventually went back to his carpentry background.  Over the years he did both residential and commercial construction, and he still enjoys woodworking projects for children and granddaughters.  Dean retired from Grey Construction, Lexington, KY, in 2010.

Dean and Ann had bought a house in Butler County in 2008, so they sold their houses in Tennessee and he moved to Kentucky in November 2010.  Ann continued to teach school in Cannon County, TN, until her retirement in December 2011.  They enjoy life in Butler County, especially being close to their daughter Karrie, her husband Chris, and their daughters Emma, Reece, and Loryn.  Dean and Ann also have a son Glennon who lives in California.

Dean was presented a Quilt of Valor at the Veterans Day celebration November 2019.  Besides the honor, the quilt is special as Ann sewed the quilt top.  That quilt and the distinction of being a Veteran of the Year are long awaited honors Dean did not get upon returning home.  He is proud to be a Veteran and an American.