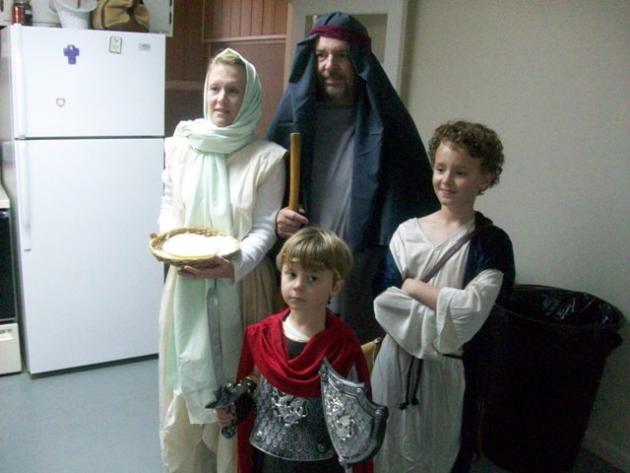 Sunday October 30 was Monticello Baptist Church’s first Bible-themed costume party. Pictured above is Adrian Loy-Goliath, Ethan Loy-David, Tim and Tina Loy-Mom and Dad.  All who attended were encouraged to dress up as their favorite character from the Bible.  Samson and Delilah were in attendance, as were Mary, Joseph and the baby Jesus, a wild pig, a Judge, the Woman at the Well, and many other Bible characters.  There were contests for best, funniest and most creative costumes.

The winner of Funniest Costume was Bobby McGuyer, who came as Samson (long hair and all) with Delilah (wife Renae) with him.  The Loy family (Adrian as Goliath, Ethan as David, and parents Tim and Tina as, who else, mom and dad) won for most realistic.

Sandy Lee (Pillar of Salt) won the award for hardest to guess.

Alison Ramsey won Most Creative for her costume as a woman with plagues. Who was I? I got out one of my old college graduation robes and went as one of the Judges.  I’d forgotten how hot those robes can get! After the contest, relay games were played and we ate various soups and desserts. Everyone who came out enjoyed a good time of fellowship, food and fun.
Thanks to Joy Wells, Delia Burns, Nathan Johnson and all who planned this celebration.