Lady Bears make it three in a row; Bears come up short at Edmonson 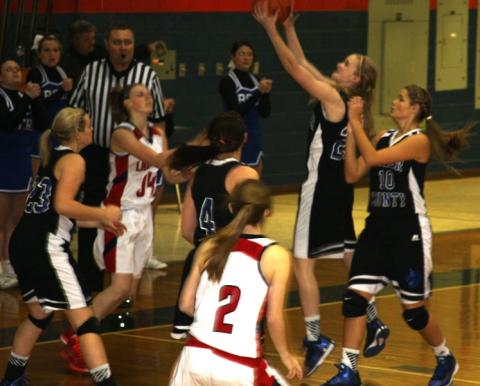 The Butler County Lady Bears basketball team made it three in a row last night with an impressive 69-66 overtime win over 12th District rival Edmonson County at Brownsville.  The come-from-behind win was sparked in part by the Lady Bears finishing strong in the fourth quarter by outscoring the Lady ‘Cats 18-10, overcoming an 8-point deficit they faced after the third.  Meanwhile, the Bears lost another heartbreaker to Edmonson County.  Fighting from behind much of the night, Butler County rallied during the final quarter, outscoring Edmonson 25-17.  But, it wasn’t enough as the Bears ended up on the short end of a 62-61 score.

In the girls' game, Butler County had three Lady Bears in double figures to lead the team’s offensive performance.  Senior guard Shawna West led the way with 15 points, Chloe Flener had 14 points, and Callie Cardwell added 10 points.  It was only Flener’s second game back from a serious ankle injury suffered during the preseason.  The lead switched hands during the first quarter with the Lady Bears trailing 17-14.  Baskets by West, Maddie Murphy, Addison Hall and Flener during the second quarter gave the Lady Bears a 26-23 halftime advantage.  The third quarter was all Edmonson County as the Lady ‘Cats outscored the Lady Bears 23-12 to take a 46-38 lead going into the final quarter.  That lead would not hold as the Lady Bears fought back.  Baskets by Hall, White, Inscoe and Flener, along with free throws by West and Callie Cardwell kept the game tight down the stretch.  With about a minute left in regulation play, a basket by Chloe Flener tied the game at 54-54.

On Friday night, January 30, Butler County faced Whitesville Trinity in another 12th District contest.  The boys’ dropped the first game 86-41 in what proved to be an almost unstoppable offensive outing by the Raiders, including a 34-point first quarter and a 50-point first half.  Trinity guard Daniel Morris actually broke a school record with ten three-pointers in game – a record that had previously been held by his father, Kevin Morris.  Butler County’s offense was sluggish throughout and the Raiders remained hot – which proved to be a bad combination for the visiting Bears.
Zack Burden led the Bears in scoring with 11 points.

The Lady Bears, in the second game, wasted little time is dispatching Trinity after racing to a 15-3 first quarter advantage.  Butler built on that lead in the second quarter and took a 34-10 halftime margin into the locker room.  Despite a rocky third, the Lady Bears finished the game strong in the fourth quarter and cruised to a 60-37 win.
Butler County had three players in double figures.  Cheyenne White led the Lady Bears in scoring with 12 points; Shawna West and Addison Hall had 10 points apiece.  In her season debut, Chloe Flener had four points.  Flener has been sidelined all season due to a serious ankle injury.

Below is a review of recent scores for both the Bears and Lady Bears: