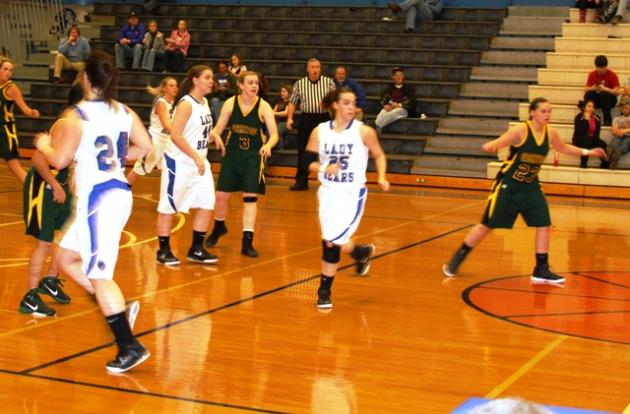 A solid first half of basketball by the Butler County Lady Bears (1-3) was overshadowed on Monday night in the second half as the Greenwood Lady Gators came to Morgantown and left with a 66-35 win.
Trailing by only nine at the half, 34-25, Butler County's patient offense and ability to handle Greenwood's full-court zone pressure kept the Lady Bears in the game.  However, a more experienced Lady Gator team found its silver bullet with a trapping half-court zone defense that gave the Lady Bears fits.  Greenwood (4-2) capitalized on the turnovers to take control of the game in the third quarter and extend its lead in the fourth.

Sophomore Katie Graham led Butler County in scoring with ten points - the only Lady Bear in double figures.  She also had ten rebounds, four offensive and six defensive.
Butler County struggled offensively for much of the game.  The Lady Bears were 12 for 24 (24.5%) in two-point field goals; 2 for 11 (18.2%) from three-point land; and were 9 for 22 (40.9%) from the free throw line.

Greenwood's Molly Lamb lead all scorers with 21 points.  Alexis Dean and Raven Perks, added 11 and 10 points, respectively.  The Lady Gators shot 49.1% (27 for 55) in two-point field goals, 30% (3 for 10) in three-point goals, and were 9 for 15, or 60%, from the charity stripe.
7th graders Cheyenne White and Chloe Flener picked up their first varsity starts for the youthful Lady Bears, joining Madeline Drake, Katie Graham, and Shawna West in the lineup.  Butler County cleared its bench late in the game, giving all players some varsity playing time.

The Lady Bears will be back in action tonight - once again against a Fourth Region team - at Todd County Central in a boy-girl doubleheader.  The girls tip-off at 6 p.m. with the boys' game to follow.  Tune in to Beech Tree 1570 AM to catch all the action or log on to Beechtreenews.com to stream the game live.