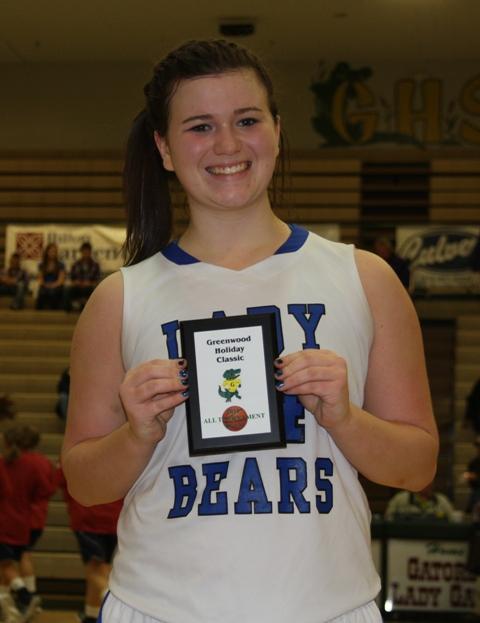 The Butler County Lady Bears wrapped up play in the Greenwood Gator Classic on Friday evening when they took on the Lady Dawgs of Clinton County High School. The Lady Bears opened play on Tuesday with a win in pool play versus Warren East High School, but things had gone sour for BCHS since that win. Two straight losses to Franklin-Simpson and Caverna left the Lady Bears needing a win on Friday to break even in the tourney. Unfortunately a slow scoring first half doomed their hopes and they fell to the Lady Dawgs by a final score of 46-38.

Clinton County came out early led by Breonia Thurman. The senior scored two quick baskets inside to give the Lady Dawgs a 4-0 lead. Madeline Drake hit a three for the Lady Bears and Koshosha Turner and Cheyenne White added two each, but the Lady Bears trailed 15-7 after a period.

Freshman Ansley Stalcup led the way on offense and defense for Clinton County in the second period. Stalcup had 5 points and 3 steals in the period. Against the Clinton defense the Lady Bears offense stalled and the Butler could manage only 4 points in the period. At halftime the Lady Dawgs led 27-11.

The Lady Bears’ Katie Graham came out of the locker room seemingly determined to get BCHS back in the game all by herself. Graham scored the half’s first four points and Clinton County Head Coach Darrell Thompson was forced to call a timeout. After settling his troops Thompson got six quick points by Thurman to stop the BCHS run, however Graham wasn’t done. Using feeds from Shawna West and Allie Easley Graham was able score 7 in the third. A three from Drake helped BCHS outscore the Lady Dawgs 11-10 in the period and the Lady Bears were still hanging in the game after the third period with the score 37-22.

In the final period Graham and freshman Shawna West led a free-throw shooting clinic for BCHS. Graham was 6 out of 8 from the line and West was 5 out of 6 as BCHS outscored the Lady Dawgs 16-9 in the period, forcing coach Thompson to play his starters and call several timeouts. However the slow start in the first half was more than the Lady Bears could overcome despite their solid free throw shooting and improved scoring in the second half. Clinton County won the game 46-38. Breonia White, mourning the death of her grandmother the night before, led the way with 16 points for the Lady Dawgs with Ansley Stalcup adding 12. Katie Graham led all scorers with 18 points and was named to the All Classic Team by tournament organizers.

On Thursday, December 29, Butler County Lady Bears took one on the chin at Greenwood High School against the Caverna Lady Colonels.  Butler County dug itself a hole in the first quarter and was never able to claw its way back into the game, falling  51-33.

Butler County was led in scoring by Katie Graham with 18.  Madeline Drake, Kasosha Turner and Shawna West all added 5 each.

For Caverna,  Ciara Waggoner had 13, Madison Faulkner added 12, and Shardai Embry and Reagan Kingery had 10 apiece.