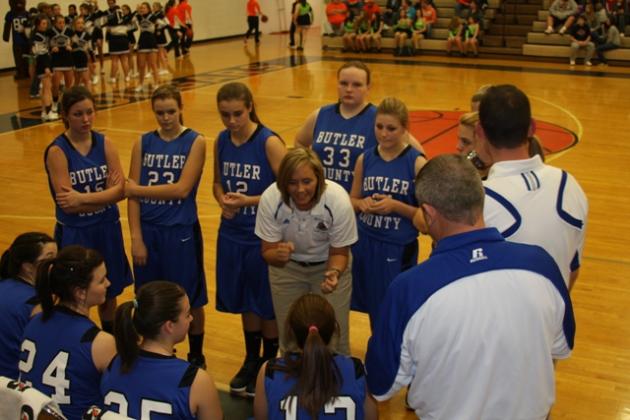 The Bears and Lady Bears headed into hostile territory on Friday night to open district play against Grayson County High School in Leitchfield. In the first game the Lady Bears faced the Lady Cougars. The Lady Cougars are expected to contend for the 3rd Region Championship this season, and features a lineup loaded with upperclassmen, including six seniors.

It took only seconds for Grayson County to show why they have such high expectations. Seniors Kelsea Wilson and Kylee Gorby opened strong and staked the Lady Cougars to an early 9-2 advantage. The Lady Bears were unable to establish any offensive flow due to the aggressive Grayson defense. After a quarter of play Wilson had already scored 9 of her game high 19 points and the Lady Cougars led 22-9.

The second quarter went much the same as the first. The young Lady Bears continued to play hard and try to take the game to Grayson County. However the GCHS squad was too much to handle for BCHS. At the half GCHS was in control, 40-19. Madeline Drake led the scoring for the Lady Bears in the first half with 6 points. Lynsie Clark, Katie Graham, and Shawna West each had 4 points in the half. Grayson County’s Wilson led all scorers in the first half with 15 points.

The Lady Cougars used a withering press and solid offensive effort to seal the victory in the third quarter. Grayson outscored Butler County 22-4 in the period with both of the BCHS baskets coming from sophomore Lynsie Clark. Grayson County pulled most of the starters to start the fourth period. Butler County took advantage of the opportunity with Madeline Drake connecting on two 3-point baskets and Katie Graham converting two layups underneath. The quick ten-point burst for BCHS forced Coach Bradley Johnson to call timeout and return some of the starters to the game to settle his team. BCHS put together a solid quarter, outscoring the Lady Cougars 17-16. In the end the final score was 78-40 in favor of the home team.

The second game featured the Cougars and the Bears in a 12th District boys matchup. The Cougars lost key starters to graduation following last season, but have been lucky enough to pick up foreign exchange student Ollie Roberts from England. Roberts has much experience in European touring basketball where he plays as a guard. At Grayson the 6’4, 250 pound Roberts plays forward for the undersized Cougars.

Roberts and junior Trey Tinsley struck fast for the Cougars. Tinsley hit a three to open the contest and Roberts established early dominance on the backboards. Brandon Thomas answered the three-pointer for the Bears and junior Elijah Flener found his way to the hoop for two baskets to keep the Bears close. At the end of the first quarter the Cougars led 18-11.

Both Dylan Goodall and Brandon Thomas were able to hit long threes for Butler County early in the second quarter. The Cougars withstood the strong BCHS open to the quarter with Roberts and Tinsley again leading the charge. Roberts scored twice down low and Tinsley added five points to lead Grayson County to a 35-22 advantage at halftime. The leading Butler County scorers in the half were Elijah Flener and Brandon Thomas with six points each.

Butler County’s Trevor Jenkins started out strong for Butler County to open the second half. Jenkins hit a layup and foul shot early on for BCHS, with Flener and Zeke Woodcock both going to the basket to score for BCHS. Todd Johnston was forced to call timeout for the Cougars as the Bears tried to cut into the halftime lead. BCHS continued to play hard for the rest of the quarter despite the timeout. Jenkins added nailed a three-pointer for BCHS and sophomore Jackson Washer out-rebounded his bigger opponents and teammates for two put-back baskets. For Grayson Brady Clemons found his shooting stroke and hit two threes and a long two-point jumper to lead his team with 8 points in the period. The Bears outscored the Cougars 17-16 in the period and score was 51-39 after three quarters.

The Cougars used the strong inside play of Roberts and the outside attack of Tinsley to put the game away early in the fourth period. Tinsley and Roberts combined for 10 points in the period and Grayson pulled away to a 68-48 win. Trey Tinsley led all scorers in the game with 17. Butler County was led by Elijah Flener with 12 points. The two teams with face one another in Butler County on January 6th, 2012.