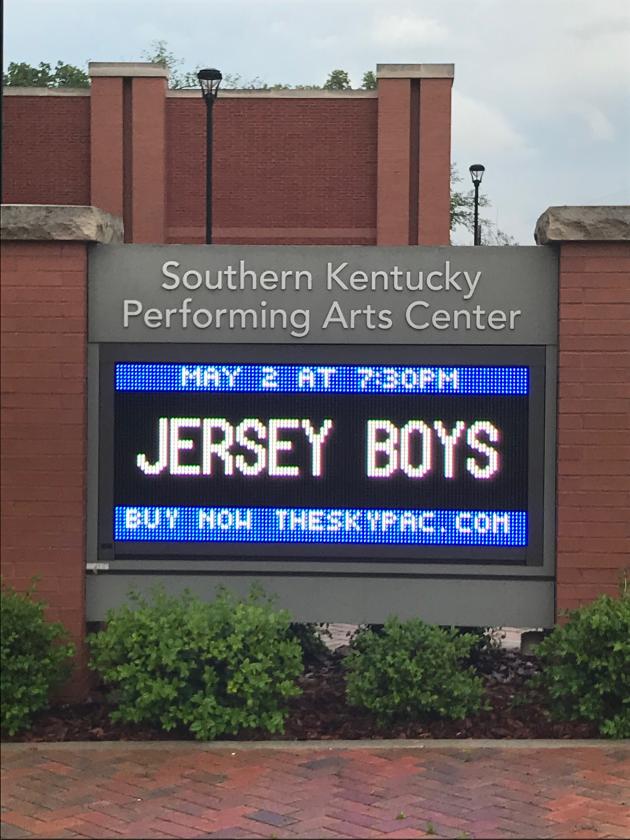 Thursday night, I attended the performance of Jersey Boys: The Story of Frankie Valli and the Four Seasons.  With music by Bob Gaudio, lyrics by Bob Crewe and a book by Marshall Brickman, this show was spot-on, exactly the way things happened.

As the musical commenced, I couldn’t help but notice that this followed the 2014 Jersey Boys movie.  The cast of the play was just as great as the story.  Jonny Wexler as Franki Valli, Eric Chambliss as Bob Gaudio, Jonathan Cable as Nick Massi and Corey Greenan as Tommy DeVito were flawless in their respective roles.

They sang the Four Seasons’ big hits.  They also sang some of the ones that got away such as “Aint that a Shame”, “Girl Come Runnin’(co-written by Gaudio) and “Will You Still Love Me Tomorrow”, co-written by Carole King.”Grease” and “Swearin’ to God” made that list but Vali did those as a solo artist.

I really enjoyed the show and loved every single song.  We got their about a half hour or so early.  My best friend also came to the show.  We have this little game we play anytime we’re at a show together: spot how many people our age are in attendance.  I’ll admit that, while there might not have been a lot, there were a few.  When I say a few, I mean very few.  We both grew up with a great appreciation of good music like this.  One of the very first albums I downloaded on Amazon was The Very Best of Frankie Valli and the Four Seasons.

A little trivia: did you know the Four Seasons were originally the Four Lovers? They released “You’re The Apple of my Eye” in 1956 under that name and continued to do so the next year.  They scored 5 top 40 hits and 3 chart albums in 1963, then 7 top 40 hits and 6 chart albums in 1964.  Valli’s solo recordings were distinguished by the fact that the Four Seasons didn’t provide backing for the songs.  October ’65 was his debut solo single “The Sun Aint Gonna Shine Anymore”.

I could go on and on but that would be many pages long! Long story short: I really enjoyed the Jersey Boys play.  As evident by the rather packed house at SKYPAC Thursday night. I’m not the only one.