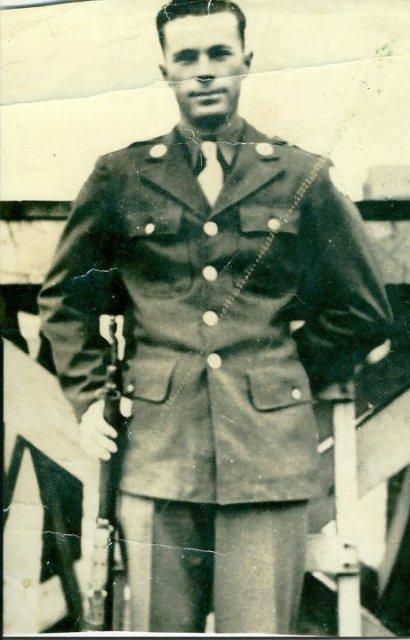 The Green River Chapter NSDAR honors the family of Mr. Dewey Brooks who served in World War II.   He passed away this year, on July 11, 2011.  His family will be honored at the Veterans Reception, after the Veterans Day Parade on Saturday, November 12, 2011 at Morgantown Elementary Cafeteria. THE FAMILY OF DEWEY BROOKS - WORLD WAR II
Dewey Brooks, son of Milligan and Leora Embry Brooks was born in Butler County.  He was married to Vivian Dockery in June of 1942.
He was inducted into the U.S. Army November 16, 1942.  Dewey was in  the 351st Infantry Engineering Regiment in heavy construction.  They were forward of the ground troops building bridges for infantry unit tanks to travel. Dewey was in the Battle of the Bulge, Northern France,  Ardennes Forest, & Rhineland.
Dewey received the following decorations and citations:  Asiatic-Pacific Theater Ribbon; World War II Victory Medal; European-African-Middle Eastern Ribbon with three (3) Bronze Service Stars and a Good Conduct Medal.  His date of separation was December 13, 1945.
Dewey bought a farm in 1946 and farmed it until he retired.  After retirement, he loved being with his family and took great pride in keeping his lawn well groomed.  Dewey died on July 11, 2011.  He is survived by this wife of 69 years, Vivian Dockery Brooks; daughter, Joyce and sons, Roger, Royce and Kenneth.  He was preceded in death by an infant son, Dewey, Jr.