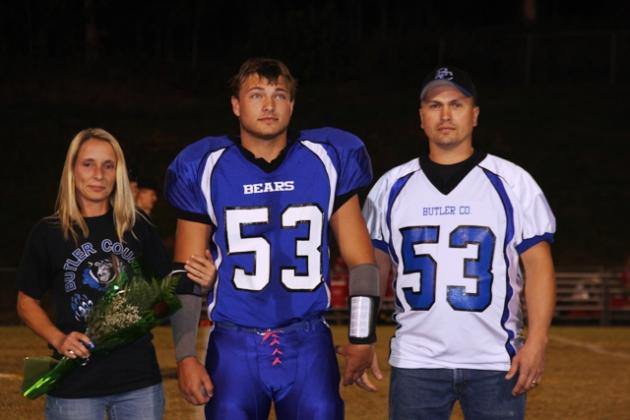 Friday was the 2011 Butler County High School Fall Sports Senior night. Recognized were the senior athletes from a variety of fall sports, including boys’ and girls’ soccer, boys’ golf, cheerleading, and football. Pictured above: Dillen White, son of Billy and Connie White of the Northside.

Katie Neighbors, daughter of Tammy Neighbors and sister of Rebecca Reedy of Morgantown.

Chance Glass, son of Ron and Leslie Glass of Morgantown.

Jon Barks, son of Paul and Vonda Barks of Morgantown, ( not in attendance)

Corey Miller, son of Donald and Lisa Miller of the North side. (not in attendance)

Zack Gary, son of Mike and Penny Gary of Aberdeen.

A.G. Vanfleet, son of Buddy and Belinda VanFleet of Rochester.

Jailyn Oaks, daughter of Joey Oaks and Jackie Thomason both of Morgantown.

Raven Brooks, daughter of Tim and Cindy Brooks of Morgantown. (not in attendance)

Jared Brosnan, son of Michael and Berna Brosnan of Provo.

Clay Embry, son of Todd and Angie Embry of Morgantown.

Jacob Oliver, son of David Oliver of Hadley and Laura Oliver of the Southside.

Kaleb Parks, son of Paul and Kim Parks of Brooklyn.

Zack Peach, son of Sherry Peach and Robert Peach both of the Southside.

Matt Renfrow, son of Ruthann Phelps of the Northside.

Tanner Shain, son of David and Dana Shain of Logansport.

Cole Tynes, son of Randy and Gina Tynes of Morgantown.