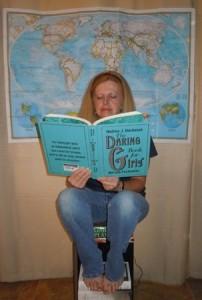 Grandfathering - One late afternoon, I stepped out onto a friend’s porch and heard the sound of a neighbor’s voice.  He was singing an old folk song in that forlorn, mournful tone that reminded me of my Papaw Mattingly and the way he used to sing as he rocked me.  I was barely three years old when he died, but I have always held onto the impression of him.  That’s the way it is with a grandfather memory and the absence of a grandfather memory as well.  I had a grandfather just long enough to know what those who never had one missed.

A few years back, the country music duo, The Judds, recorded a song entitled, Grandpa, Tell Me Bout The Good Ole Days. That song was written by Jamie O’Hare, a Nashville songwriter.  I heard an interview in which Jamie was asked if the inspiration for that song had come out of his relationship with his own grandfather.  To my surprise, Jamie answered that he had never known a grandfather.  He went on to say that he had written that song out of a need for one.

My oldest daughter, Natalie, was very close to Garey’s father, J.D..  (He passed away when she was thirteen.)  Natalie was the first grandchild in the family, and J.D. would do anything for her.  Some of my favorite memories are of Natalie sitting in the middle of the kitchen table with two huge watermelon halves on either side of her.  J.D. would let her put her little hands right in the middle of the melon and scoop out what she wanted.  Each time we visited J.D. and Agnes in Alabama, he would take her outside to see the dogs and the tractor and anything else he thought might interest her.  When he would bring her back into the house, they’d usually turn right around and head back out, because she would be squealing, “Outside, Papa!  Outside!”

J.D. Hughes was a wonderful grandfather, and the kids lost him way too early.  With that said, it might surprise you to know that I, personally, did not care much for him.  He was a very controlling man who kept his family reigned in so tightly that it was hard for them to make a move without his ok.  I’ve always been a free spirit, so our personalities didn’t exactly mesh.  Let’s just say we had a few disagreements and leave it at that.  The thing about grandfathering is this: a grandfather is rarely the same man who raised his own children.  No matter how I felt or feel about J.D. and our differences, there will always be that point of light back there where he was able to shine, a place where he gave over control to a curly-headed two-year-old.

Garey and I became grandparents for the first time eight months ago.  Our granddaughter, Sabria, lights up when Garey walks into the room.  When Garey gets home from work, he always says to her, “Where’s Pa’s girl?”  When he holds her, he tickles her, and he chases her across the couch, where she dives head-first into the throw pillows.  All that remains visible are a diapered butt and two little legs kicking up a storm.

There are almost as many names for grandfathers as there are grandfathers, themselves, and it is usually the first grandchild that chooses the moniker.  In our area alone, I’ve heard Papa, Pa, Pappy, Poppy, Papaw, Pawpaw, Grandpa, Granddaddy, Pops, Big Daddy and, my personal favorite, Boompa.  Garey (AKA Pa) and our friend and business partner, Greg (AKA Big Daddy), have pictures of their granddaughters hanging in the office of Valvoline Express.  They show them to other grandfathers, who come in with pictures of their own.  I love to listen to the exchange between the guys, like the time one grandfather told Garey that his granddaughter calls him Grandpa, and Garey said, “Right now, mine calls me I ya I ya I ya (Sabria’s jabber word at the time).  “How old is she?” the man asked with hesitation.  “Six months,” Garey said.  “Oh,” the man said, with relief, “that’ll change soon enough.”  “Yeah, I’m hoping she’ll call me Pa eventually,” Garey said.

Proverbs 17:6 says, “Grandchildren are the crown of old men.  Truer words were never spoken, because regardless of what your children or parents or in-laws think of you, your grandchildren will think you are kings.  I bet if you looked up the word grandfather in the original Greek, it would even say: see second chances.

Cheryl Hughes lives on a farm in Butler County where she is wife to Garey; mom to Natalie and Nikki; grandmother to Sabria; and caretaker to two dogs, three cats and two horses.  She holds a bachelors degree in music and enjoys playing guitar and freelance writing.