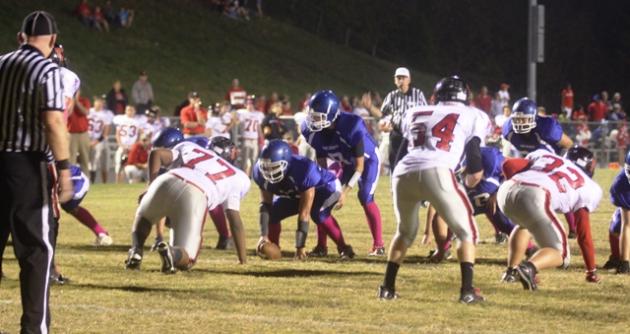 Butler Co. football, made sure Senior night was one the eleven seniors would remember. The Bears crushed the Todd Co. Central Rebels 42-0 in the last regular season home game. The Bears now 7-1 overall, and more importantly  3-1 in district play welcome the bye week and will be idle as they prep for the two remaining games of the regular season.

For some reason earlier in the week, the Todd Co. Rebels (1-5); felt the Bears schedule was not worthy of respect? Wonder what that feeling is now; let’s take a quick recap of the Butler Defense:
Forced two blocked punts, both resulting in a touchdown, (2) interceptions, (1) lost fumble, a negative (-19 yards rushing on the night); and a total offense of only 35 yards.  So to sum it up the Todd Co. Rebels offense was held in check all night long.

The Bears took the lead  when special teams blocked a punt. Senior Tanner Shain broke through blocking the punt, the ball rolling free in the end zone was recovered by Zek Woodcock for the touchdown. The Cole Tynes kick was good, Bears led  7-0 with 6:42 remaining in the first quarter. The Bears scoring continued as senior running back Jared Brosnan dove in from two yards out for the next touchdown, again the Tynes kick was good; Bears 14-0.  Right before the half senior Clay Embry snagged a twenty-six yard pass completion from quarterback Elijah Flener for the third score for the Bears. Tynes kick again good made it 21-0 at the break.

The third quarter of play the Bears took complete control and dominated the event with three more touchdowns.   QB Flener got the hot hand, and found Cole Tynes on a 17 yard touchdown pass, and then four minutes later hit Clay Embry on a 18 yard touchdown strike.  Tynes tacked on both extra points and score now extended to 35-0. The final blow of the night came when senior Jacob Oliver, broke through and blocked a Rebel punt, recovered the loose ball and made the eighteen yard jog into the end zone. That would be the second blocked punt of the night resulting in a Bears score. Tynes again was good for the point after, and your final score read 42-0 Bears.

Here is a look at the game inside the numbers, and a breakdown of the game. Again, the Bears will be idle on October 14, with the open  date. The Bears will return again to action on Friday, October 21 @ Hancock Co. HS.