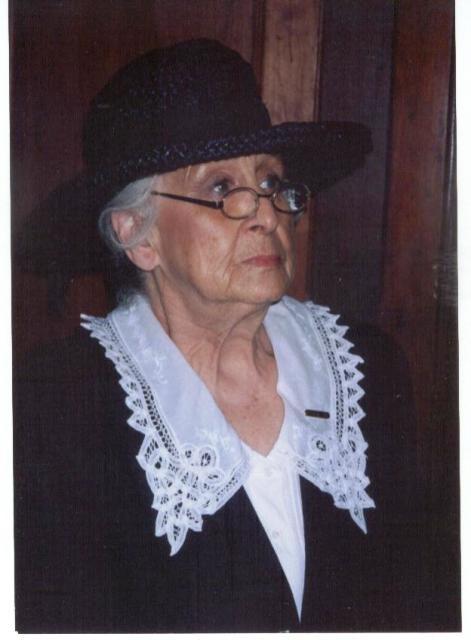 March is Women in History month and the Butler County Chapter NSDAR has chosen to recognize Joyce Porter Hammers as our Woman in History. Joyce was born in the Eden community of Butler County and continues to reside in that area. She was married to the late Floyd Hammers and has two children: Kelley (Leo) and Clark (Debbie). She has two grandchildren Dana Felty Bynum and Clark Thomas Hammers and is looking forward to the birth of another great grandchild.  She is a member of the Butler County Chapter NSDAR, KY Guild of Artists and Craftsmen and is an honorary member of Alpha Epsilon Chapter of Delta Kappa Gamma International. She was invited to be a member of DKG for her many historical presentations to area schools. Mrs. Hammers is also a certified lay minister for the United Methodist Church.

Joyce began painting at age 47 after her children were grown and has become an award winning artist. She has done numerous portraits, landscapes, florals, still life and also pen and ink drawings of many Butler County landmarks. Her works have been shown in art shows throughout Western Kentucky and beyond. There was always a love of art in the Hammers home with husband Floyd also being a recognized artist.

In addition to her painting Joyce enjoys presenting dramatic monologues of historical women. Her first was a portrayal of Methodist leader Susannah Wesley which has been presented throughout the state. Another character is the Pioneer Woman in the early settlement of Kentucky, which is an adaptation from the life of her ancestor Sarah Clark, the wife of Revolutionary soldier John Porter, Jr.

Joyce has also developed a program on Native American history which has been presented to area schools complete with Indian dress and many artifacts. Mrs. Hammers has recently enjoyed creating an award winning collage on the Civil War period in American history. This has been on display at Hobson House in Bowling Green and she currently has a Civil War exhibit at the Butler County Public Library.  Still another project has been the application for a Kentucky Historical marker for Bishop John Monroe Moore, Morgantown native and nationally recognized leader in Methodist Church history. Joyce has just received notification of approval for the placement of the marker.

Please join the Butler County Chapter of the National Society Daughters of the American Revolution in recognizing Joyce Porter Hammers as our Woman in History on Thursday, March 22, 2012 at 6:30 p.m. in the meeting room at the Butler County Library.

Submitted by Cousin Don Baker (not verified) on Fri, 03/09/2012 - 6:46am
Proud of you.
Submitted by Richard Spiekhout (not verified) on Fri, 03/09/2012 - 7:11am
Super Lady. Butler County has been blessed with several.
Submitted by Michael Melton Wirth (not verified) on Fri, 03/09/2012 - 10:42am
Joyce is indeed an inspirtation and then she is gracious enough to share her talents with others. Joyce Porter Hammers is a role model for women--no, make that for people. In other words she follows the old adage, "Do what you love and love what you do."
Submitted by Ben Annis (not verified) on Fri, 03/09/2012 - 11:03am
Extraordinary women who is constantly volunteering her time and is so deserving of all recognition. Congratulations!
Submitted by Dana Felty Bynum (not verified) on Fri, 03/09/2012 - 11:54am
Yes, Granny!!! This woman NEVER stops blowing minds! I love this. Thank you.
Submitted by Margaret Ann Huff (not verified) on Sat, 03/10/2012 - 10:07pm
I feel honored to know a lady with such talent, and who always takes the time to share her talent with others
Submitted by Mabel R. Boone (not verified) on Mon, 03/19/2012 - 10:12am
Congratulations Aunt Joyce! I think the first time that I knew that you had artistic talent was when you brought a banana pudding to Mother and Dad's (Porter) house for a Thanksgiving Dinner. You had carefully shaped the meringue on top of the banana pudding like chicken or a turkey! As a young kid I was very impressed! When we lived in Maysville, Ky, Aunt Joyce came to the Straub Elementary School and the Mason County Middle School and performed "The Diary of Sarah Clark." She gave a great performance and the historical information about early pioneer days in Kentucky was captivating. Her historical display was also very interesting and the kids were very attentive. After speaking to the school children we went to Old Washington, Ky and made some great pictures of her in the historical buildings there. I have always loved her artwork of the historical buildings in Kentucky. My sons enjoyed her baseball art prints and her Kentucky Wildcat print. I have a picture of the Porter Blacksmith Shop that stood in Eden in my house and I love the Eden one room school print. In later years I have enjoyed her Christmas display in her home. I loved her notecard set that was sold by the DAR last year. Have a great night as you are honored by the Butler County DAR. I wish I could be there. Mabel Romans Boone
Submitted by Ann Fowler (not verified) on Thu, 11/08/2012 - 10:46am
Joyce, Meeting you during lunch with my dad at the Oaks at MD Anderson Tuesday was a delight. I could tell there was something special about you. This morning I went on-line and found out a little bit more about the projects in which you are involved. It was a delight meeting you and what an encouragement you are to the lady you had know for such a little time and to me and my dad sharing your personal experience with the staff at MD Anderson. It was a pleasure to meet you. May God Bless you as you minister to others through your creative talents. Ann Fowler
Submitted by Audra Robinson (not verified) on Wed, 01/09/2013 - 3:37pm
Joyce Hammers is a wonderful woman who is a model of what a woman should aspire to be. As a child she painted a portrait of me and be came great inspiration and friend. She has tirelessly helped others while expressing so much light in her art. She is more than a great woman in history she is a key player in gods plan who brings light and warms to all who meet her.