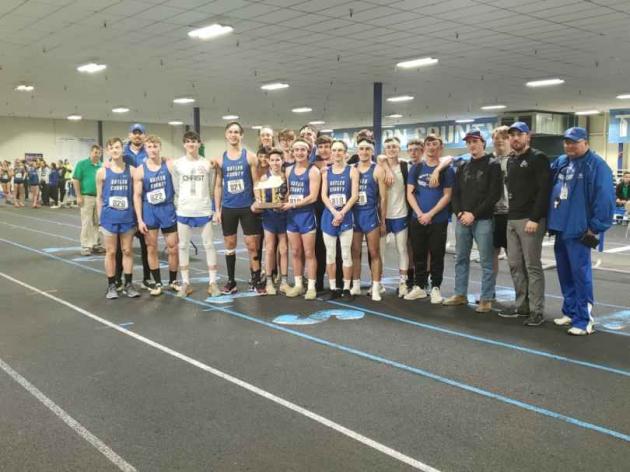 The Bears are the Class AA Indoor State Track & Field Champions for the first time in school history. Butler County blew out the field Saturday at the Mason County Indoor Track & Field Complex. The Bears totaled 87 points, beating State runner-up Rockcastle County by more than 20 points. Coach Fuller was thrilled with his team's performance "We knew we were one of the top 3-4 teams in the meet based on rankings, but these kids met and out-performed their seeds in almost every event. I couldn't be prouder of the way they competed". The Bears had two individual State Champions as well. Trenton Stovall won the 55m Hurdles in 8.37 seconds & Tyler Lynch won the high jump at 6'2".

"Super proud of Trenton, he has been in the program as long as I have been coaching here at Butler County, I knew from the beginning he could win a championship one day. I'm proud to see him reach this milestone." - Coach Steven Lindsey

"For Tyler to win a State Championship in only his second season competing in Track & Field is a huge accomplishment. He has the talent to do extraordinary things, and I can't wait to see him compete in the upcoming outdoor season." - Head Coach Andy Fuller

Butler County had several other notable finishers in both Boys and Girls events.

You can see complete results at https://ky.milesplit.com/meets/372264/results/690950/formatted#.XmfSXzFKjcs