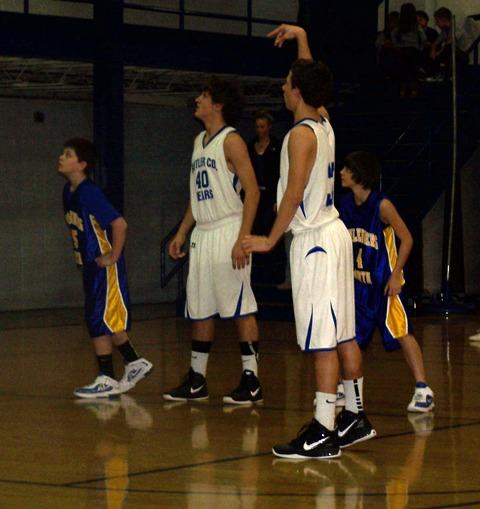 Anticipation was high as middle school boys basketball fired back up on Tuesday night after Christmas break as the 7th grade team faced off against Muhlenberg North on the first day back to school.  The Bears had traveled to North earlier in the year and was served their only loss for the season thus far.  With this being a district match up, the Bears needed to win by 8 points to sew up the number one seed in the GRVC tournament at the end of the season.   Apparently the boys knew exactly what they needed to do and they wasted no time getting it done.  Rex Henderson put on a shooting clinic in the first quarter scoring 13 points himself leading the Bears to a score of 26 – 4 at the end of the quarter.  Bear domination continued throughout the first half as the Bears went to the locker room at halftime leading 39 – 12 with Blake Graham contributing 15 points for the half.  The 3rd and 4th quarter offered opportunities for some younger players to take the floor and finish what the first five started.  North was held scoreless the 3rd quarter with a strong defensive presence by the Bears.  The 7th grade went on to win this one with a score of 53 – 22.  Leading scorer for the Bears was Blake Graham with 19.  Rex Henderson had 15, Bailey Anderson 8, Brennan Grubb 5, Skyler Moore 2, Caleb Beasley 2, Kaleb Casey 1, and Kyle Casey 1.

After a few minutes of warm up, the 8th grade team took the floor for the second game of the night.  One might have expected the Bears to put on another clinic with Muhlenberg North considering the fact that the Bears won handily with a score of 41 – 17 the last time these two teams met and the fact that North’s 8th grade team had only won 4 games this season, but such was not to be the case for the Bears on this particular night.  Bears struggled in the scoring department converting a combined 5 field goals the entire game.  North, on the other hand, had several players who didn’t have any trouble finding the goal and had 7 players get in the scoring column.  It just wasn’t a good night for the 8th grade team as the ball just wouldn’t go in the hole.  Stars won this one with a score of 44 – 19.  Scoring for the Bears was Rex Henderson 10, Bailey Anderson 4, Blake Graham 2, Dallas Miller 2, and Kyle Casey 1.

On Thursday night the Bears traveled to Bowling Green to take on the Trailblazers from Bowling Green Homeschool.  Both 7th and 8th grade teams won easily, scoring at will.  The 7th grade game allowed ample opportunities for all 16 members of the team to get playing time starting in the 1st quarter.   12 total Bears got on the scoreboard with balanced scoring by most players and lots of opportunities for assists.  Blake Graham led the way in scoring with 16.  Kaleb Casey had 7, Ty Burden 6, Caleb Beasley 4, Rex Henderson 4, Bailey Anderson 3, Neil Bewley 3, Kyle Casey 2, Chandler Franzell 2, Skyler Moore 2, Austin Norris 2, and Evan Johnson 2.  The 7th grade team beat the Trailblazer 53 – 20.

Ditto would be a good way to describe the second game on Thursday night as the 8th grade team took the floor against Bowling Green Homeschool.  Once again the Bears took an early lead and never looked back with plenty of opportunities for all 16 players to see action.  Bear scoring was once again balanced with 9 players scoring and Bears showing unselfish play with assists.  The 8th grade team won 49 – 24.  Scoring in the 8th grade game was Rex Henderson 14, Ian Embry 9, , Bailey Anderson 7, Austin Nave 5, Blake Graham 3, Dallas Miller 3, Nolan Johnson 2, Jacob Hixenbaugh 2, Dylan Inglis 2, Kaleb Hunt 2.