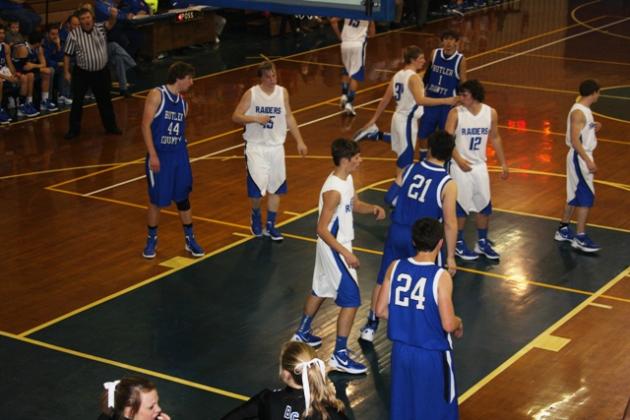 Whitesville, KY was the destination on Friday night when the basketball teams from Butler County High School loaded up the bus and hit the road. The Bears and Lady Bears each had their second district game of the season, and for one of the BCHS hardwood teams it was going to be a big test without a key part of their attack.

The Bears were up first on Friday night against the Raiders of Trinity High School. As usual the little Whitesville gym was filled to capacity with a rowdy crowd hoping to see their team pull an upset. Both the Bears and Raiders came into the game winless and both teams felt like Friday night was their shot to break the losing streak.

Unfortunately for the Raiders the BCHS squad includes 6’7” sophomore Trevor Jenkins. Jenkins established his inside game early for the Bears on his way to a 22 point, 10 rebound performance. Jenkins scored the first points of the game and never looked back for BCHS as the Bears jumped all over the Raiders 22-8 in the first period. The Bears also saw Zeke Woodcock, another sophomore, get his game on track early as well. Woodcock had six points in the first half and 10 in the game. Jackson Washer continued to be one of the top sixth men in the area as he came off the bench for 6 points and 4 rebounds in the first half and the Bears went to the halftime break up 37-16.

No amount of coaching and adjustments could make any of the Trinity boys grow several inches at halftime, and that’s what needed to happen if they were going to have a shot in the second half. Butler County’s Jenkins continued to establish himself around the basket in the second half, scoring 11 of his 22 points ini the third period as the Bears put Trinity away for good. Coach Greg Woodcock pulled his starters at the end of the third period and the Bears cruised to their first win of the season by a final score of 73-40.

After the boys yielded the floor it was time for Lady Bears and Lady Raiders to face off in the night cap. For the BCHS it would be their first game in more than two years without sophomore point guard Lynsie Clark starting and running the offense. Clark, a starter since her eighth grade year, will miss the remainder of the 2011-12 season with a lisfranc fracture in her foot. Clark underwent successful surgery on Friday morning, but will be sidelined for up to 12 weeks, then will face rehab for the injury. For fellow sophomore Katie Graham the game marked the first time in her playing career that she had taken the floor without her close friend Clark, and it forced Coach Christy Clark to use a committee of point guards to run her offense.

The Lady Bears responded to the challenge, led by Graham. Graham opened the scoring and had one of her best nights as a Lady Bear as she had game highs in both scoring, 18, and rebounds, 14, to lead her team to the victory.

The Lady Bears went to Graham early and often in the contest. Graham used passes from Madeline Drake and Shawna West to establish herself early on in the post. The Trinity girls fouled often in the paint but Graham hit her free throws to help build the BCHS lead early. Junior Madeline Drake found her outside range and added 7 first half points, and every Lady Bear played before the break for Coach Clark. When the teams headed to the locker room for the break the Lady Bears were in control 23-11.

The second half saw no letdown for BCHS. With West and Drake running the offense and finding their center Graham continued to almost score at will on the overmatched Trinity girls. Drake hit from outside and inside, and a total of 8 Lady Bears scored in the second half as BCHS grabbed their first win of the season by a final of 48-29.

After the game the emotions of the week showed through when Katie Graham was interviewed during the Beech Tree News Postgame Show on 1570 AM WLBQ. A tearful Graham praised her teammates after her double/double performance. “This was a hard game for me, I’ve never been in a game without (Lynsie Clark) out there with me. Shawna (West) did a good job for us. She shouldn’t have to play minutes like this, but we don’t have older girls to step up, so she’s in there and she did a good job. Our young girls did good and we all played hard and it was a good win for us.”

The schedule doesn’t get any easier for the Lady Bears. On Monday night the Lady Bears play a loaded Greenwood High School team that many think will contend to go to the 4th Region Tournament. On Tuesday both Bear squads travel to Todd County for a boy/girl double header, then on Thursday night the BCHS teams have another district doubleheader at Edmonson County. All BCHS Bear and Lady Bear game this week will be broadcast live on the Beech Tree News Network at 1570 AM and on Beechtreenews.com.