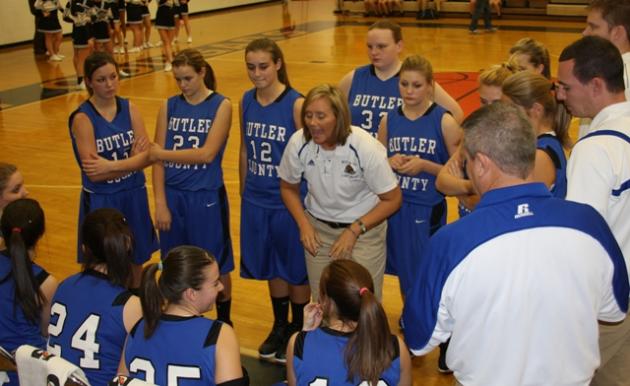 A former district foe was on the schedule Tuesday night when the basketball squads from Butler County High traveled to Todd County. Rebel Gym greeted the Butler teams with a rowdy crowd, and a hot and stuffy environment.

The first game featured one of the top teams in Kentucky’s 4th Region, the Todd County Central Lady Rebels. The Lady Rebels were 4-0 coming into the matchup thanks to one of the state’s best scoring tandems Ariel Johnson, 22.5 ppg, and Claire Hart, 18.5 ppg. Johnson showed her scoring prowess to the Lady Bears early in the game. Johnson had 15 of her 21 points in the first half as the Lady Rebels owned a 31-11 advantage at halftime. Madeline Drake hit two 3-point goals for the Lady Bears in the first half to lead the BCHS scoring.

Despite Drake adding ten second half points the fast, experienced Todd County Central girls were too much for the Lady Bears. Coach Steve Phillips stopped his press early in the third period, and pulled most of his starters at the beginning of the fourth. Drake’s ten points included two more threes, giving her four for the night. Katie Graham was hampered by a sore foot for most of the game and added six points for the Lady Bears. Todd Central’s Claire Hart led the second half scoring with 12 of her eighteen points, and the Lady Rebels grabbed an easy win at home by a final score of 67-27.

By the start of the second game Rebel Gym was hot and had turned into a hostile environment. Butler County coach Greg Woodcock owned a height and size advantage in the game, but was tasked with slowing down a balanced scoring attack built around seniors CJ Broderick and Michael Rager. The Rebels have a strong supporting roster as well, with four other players that average at least 5 points per game.

Early on the Rebels were able to find seams in the the Bears’ 2-3 zone defense guard Jon Michael Brown hit for six points in the first quarter. However he was matched by six points from Zeke Woodcock playing in a hybrid g/f position for the Bears. Brandon Thomas added a long three pointer and the Bears had the Rebels tied after a quarter at 9-9.

Sophomore Trevor Jenkins had passed up two threes to get the ball to teammates in the first period. Early in the second the defense gave Jenkins space on the wing and he made them pay by nailing a three from the left side to give the Bears their first lead of the game. Moments later Lucas ‘Taco’ Bratcher came up with a loose ball and drove to score and extend the BCHS lead. Woodcock and Bratcher each added baskets to extend the BCHS lead to 26-19, the longest of either club for the night. Todd Central answered with back-to-back drives from Jaylin Henry and CJ Broderick to get the Rebels back to within a point at 26-25, before a BCHS layup ended the half with the score 28-25. However a foul was called on Butler County as the clock expired, sending Todd County Central’s Dustin Naylor to the free throw line for one shot and a bonus. Naylor missed the first shot officially ending the half.

Zeke Woodcock lead all scorers in the first half with 10 points, with Trevor Jenkins adding 7 points, and 5 for Brandon Thomas. Jaylin Henry led the Rebels with 8 points, Broderick had 6.

Todd County Central came straight at the Bears to begin the second half. Broderick used a quick drive to cut the lead to 1, but was answered with a BCHS layup on the other end. Todd County kept going to the basket strong resulting in several trips to the free throw line. On the Butler County end of the floor both Elijah Flener and Dylan Goodall had baskets taken away because of questionable charges involving Dustin Naylor. Despite the fouls on the BCHS starters the Bears were able to hold on to the lead behind another strong outing from BCHS’s sixth-man Jackson Washer. Washer came off the bench for five points and four rebounds in the third period to keep pace with the Rebels.

Late in the third period Todd’s Naylor set a hard screen on BCHS’s Dylan Goodall. When Goodall moved through the moving-screen Naylor flopped to the floor, resulting in an intentional foul call on Goodall. With the BCHS fans and and coaching staff loudly protesting the call, Naylor missed both intentional foul free-throws. The Bears still led 39-35 going into the fourth period.

Early in the fourth period Butler County’s Elijah Flener drove to the hoop and looked to be going to the line for a potential three-point play. However, the basket was taken away and Flener was given his fourth personal foul with the charge. This led to a heated exchange between the official and BCHS assistant coach Chad Flener near the scorer’s table.  According to Flener he was asked by the official to leave the scorer's table if he was going to criticize officials.  Flener complied and went to another part of the gym. With both sides of the crowd loud and on their feet Flener, continued to chastise the officials as he made his way to the visitor’s seating section.

When the game resumed, Todd Central’s Naylor used a hard drive to get a trip to the free-throw line with the Butler County crowd livid that a charge wasn’t called. Naylor missed both free throws and the Bears continued to hold the lead. On the next BCHS possession Washer hit a layup and a free throw to extend the BCHS lead to 44-41. Then Butler County’s Elijah Flener fouled out of the game defending yet another rough drive by Naylor of the Rebels. Again Naylor failed to connect at the line, but a deflection and layup by CJ Broderick cut the lead to 44-43 and caused a timeout for the Bears.

Out of the timeout Butler County’s Zeke Woodcock used a 90-foot inbounds pass to find a streaking Jackson Washer for an easy BCHS basket. After Trevor Jenkins rebounded the ensuing Todd Central miss Woodcock hit two free throws for the Bears and the lead was 48-45 BCHS.

Broderick and Henry would lead one more charge for the Rebels. Broderick hit a jumper from the elbow to cut the lead to one, but he was answered once again by Jackson Washer. Washer had fifteen points in the second half, including ten in the fourth period for Butler County. None of Washer’s points were bigger than his final two. With the Bears leading 51-50 Washer calmly nailed two free throws to push the lead to three. This forced Todd Central’s Broderick to try a long, contested three as time expired. The shot was no good and the Bears had a hard fought upset win 53-50.

Following the game TCCHS officials had to dissuade several rowdy fans from taking to the court. Along with local law enforcement, school officials were able to get the unruly fans quickly out of the arena before the situation escalated.

The Bears placed three players in double figures. Zeke Woodcock and Jackson Washer each had 15 points and Trevor Jenkins added 10 as the Bears won their second straight game. The Bears will be back in district competition on Thursday night when they travel to Brownsville to take on Edmonson County in a boy/girl double header. The Wildcats are 1-5 overall and 0-1 in 12th district play. The Bears are now 4-2 overall and 1-1 in the district. A win over the Wildcats would give the Bears sole possession of 2nd in the district behind 2-0 Grayson County.

Both games will be broadcast live on 1570 AM WLBQ beginning with the Beech Tree News Tipoff at 5:45 p.m. The Lady Bears will play first at 6:00. Games may be listened to live on beechtreenews.com by clicking on the RADIO icon located at the top of every BTN page.