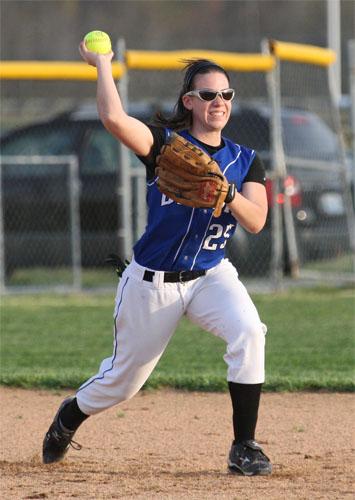 The Butler County Bears' softball team got back on the winning track Friday night with a 15-1, 5-winning win at McLean County.  The Bears used a 12-hit attack, solid defense and consistent pitching to earn the win.

Also recording hit for Butler County were Katie Graham (2-1B, 3-RBI), Jazmin Reynolds (2-1B, 2B), Kassie Phelps (2-1B, RBI), Morgan Manning (2B), and Amy Rogers with triple and RBI.  Natoshia White, Allie Howard, and Payton Grubb each had an RBI.

"We had a solid game tonight - both offensively and defensively," said BCHS head coach John Embry.  "Our performance was more consistent and that's important as we move forward."

In JV action, the Bears won a 10-0 decision.  Alex Embry had two singles, Allie Howard had a single, and Hannah Peach doubled.  Peach had two RBI,while Embry and Howard both had one.

Pitcher Kassie Phelps struck out three batters and walked one in the shortened game.

Meanwhile, on Wednesday the Butler County JV team picked up a pair of wins at home against Edmonson County.  The Bears won the first game 5-1 and came from behind to win the second 10-6.

Recording hits in game one were Naomi Cade (1B, 2B, RBI), Allie Howard (1B, RBI), and Hannah Peach (2B).  Candace Ibarra and Callie Cardwell each had a RBI.

Finally, on Saturday defensive mistakes by Butler County and strong hitting by Daviess proved to be too much for the Bears, who fell 11-1 in five innings.  The Panthers plated five runs in the opening inning and Butler was never able to recover.

Pitcher Morgan Manning allowed 12 hits and four earned runs in five innings.  She struck out two batters, walked one, and hit one.

Drake and Phelps connected for nice double-play in the fourth, while Payton Grubb made several nice plays in right field.

"Our five errors gave them extra outs and multiple scoring opportunities.  Daviess played error-free ball and that made a difference," said Coach Embry. "We've also got to do a better job keeping the ball down in the zone and hitting our spots."

Butler County fell 8-3 in the JV game.  Naomi Cade, Sarah Johnson, and Kassie Phelps all singled.  Candace Ibarra roped a double with a RBI and Callie Cardwell also had a double.