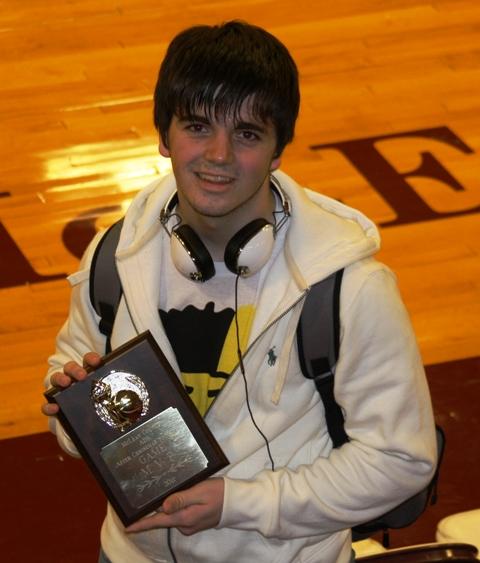 After their 102-97 loss on Wednesday the Bears were back in action Thursday morning in Calhoun. It was the third and final day of the Advanced Drainage Systems Roundball Roundup at McLean County High School, and the Bears would be facing a district foe in Whitesville Trinity High School.

The Bears defeated the Raiders 75-40 on December 9th in Whitesville, but the previous loss didn’t stop the young Raiders from taking it to the Bears early in the game. Butler County was able to open up a lead early in the game behind strong opening quarters from Trevor Jenkins and Elijah Flener. Behind the duo the Bears owned a 14-7 lead after the first, but Whitesville would not go away.

Junior guard Luke Johnson found his range in the second period and shot the Raiders back into the ballgame. Johnson had 9 points in the period, and 13 in the first half, as the Raiders managed to cut the BCHS lead down to a single point before the Bears responded. Sophomore Zeke Woodcock hit a pair of threes on his way to 9 points in the first half, and Jackson Washer and Dylan Goodall also posted good efforts for the Bears to help BCHS weather the shooting storm from Luke Johnson. The teams each scored 20 points in the period and the Bears took a 34-27 lead into the halftime break.

Any worries that the Trinity boys would find a way to upset the Bears were put to bed quickly after halftime. Jackson Washer and Zeke Woodcock led the way in the second half for the Bears and Trinity was never able to mount a charge. BCHS opened up a 50-37 lead after the third period, and midway through the fourth period coach Greg Woodcock cleared his bench. In the end the undersized but over achieving Trinity kids just couldn't find a way to slow down the BCHS scoring. Butler County put three players in double figures and pulled away to an easy 74-49 victory.

The win makes the Bears’ record 5-9 heading into the second half of the season. The Bears will be back in action again next Tuesday night, and will once again be playing in Calhoun. This time the Bears will take on McLean County High School in a JV/Varsity twin billing. The JV game will begin at 6 with Varsity action at 7:30. Beechtree Radio 1570 AM will carry the game live beginning at approximately 7:20.