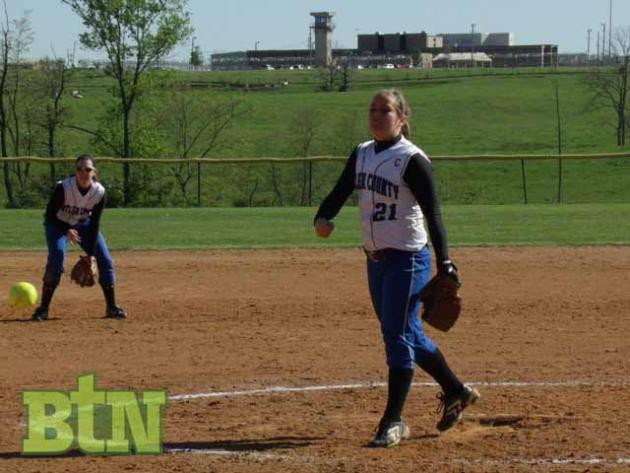 The Butler County Bears' softball lost one, won one, and then lost another in last weekend's Oldham County Spring Break Classice.  The Bears fell 3-1 to 12th Region power Mercer County on Friday night; rallied to defeat North Bullitt 9-3 on Saturday morning; then bowed out of the tournament with a hard-fought 2-1 loss to Holy Cross (Louisville).

Butler County managed only a pair of hits against a hard-throwing Mercer County pitcher - both singles by Amy Rogers and Morgan Manning. Rogers also had a stolen base.  Ironically, the Bears took the first lead at 1-0 in the fourth on an RBI-single by Manning but a pair of untimely errors cost Butler County in the bottom of the inning as Mercer plated two runs.  They added another run it the 5th inning for the 3-1 win.

Shortstop Madeline Drake and rightfielder Alex Embry made nice defensive plays.  Drake cut down at runner at the play and Embry made a nice backhand catch on a ground ball in the gap.  Third baseman Kassie Phelps made several nice scoops on a hot corner.

Pitcher Morgan Manning allowed seven hits and one earned run, while striking out one batter and walking none.

Butler County used a 12-hit attack to outpace North Bullitt 9-3 in the second game of pool play.  The Bears scored in five of seven innings in a game that Butler County dominated from the beginning.

Against Holy Cross, the Bears once again struggled offensively, managing only three hits - two of which were singles by 8th grade first baseman Hannah Peach in the 2-1 loss. Catcher Amy Rogers doubled and later scored on a Peach single.

Embry (RF), Natoshia White (2B), and Payton Grubb (LF) all made nice plays in their respective positions.

Manning allowed five hits, one earned run, sturck out one batter and walked one.

The Bears collectively struck out 14 times in 24 plate appearences.

"We had a pretty good tournament overall against good competition," said BCHS head coach John Embry. "Our pitching and defense gave us opportunities to win games but our bats weren't able to hit the better pitching that we saw here.  It was a good opportunity for us, one that will help us down the road."