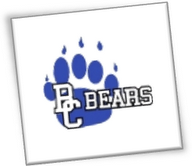 The BCHS Bears knew that a rematch with Owensboro Catholic was a chance to prove to the Aces that the Bears had improved; it didn’t take long. On the opening kickoff the Bears recovered the Aces fumble on the twenty-two yard line, and five plays later Jacob Oliver reeled in a Elijah Flener pass for the touchdown, the Cole Tynes kick was good, Bears took an early 7-0 lead over the heavily favored  Owensboro Catholic Aces (11-0) on the season.

On the next two offensive possessions the Aces would fumble the ball away to the Bears. But the Bears could not covert the Aces miscues into points. Both defenses swarmed to the football, and credit both defenses for creating many turnovers on the night. In the first half alone, Owensboro Catholic committed (five) turnovers, while the Bears turned to ball back over to the Aces (four) times in the first half of play.  The results,  a 28-14 Catholic halftime lead. With the Bears trailing 28-7, with only nineteen seconds left in the half rather than kneeling to end the half; Flener intercepted a  pass and converted the pick six for a Bears TD, the Tynes kick good Bears trailed 28-14 at the intermission.
But gained needed momentum going into the locker room.

A closer look at the first half, note the Aces controlled the football for fifteen of the twenty-four minutes. This was due in part to surprisingly the Catholic running game.  Hardesty & Hayden, Catholic’s QB and star running back combined to rush for 244 yards in the first half and all four touchdowns.  Catholic on the year has been noted for it’s no huddle hurry up offense and passing air attack.

The third quarter of play was a wash, with no points and both defenses dominating the event. The fourth and final quarter the fireworks kicked into high gear.  Catholic with 11:09 to go in the game connected on a 37 yard field goal to extend the lead to 31-14. The last four minutes of the game was non-stop action and scoring.  Cole Tynes snagged a twelve yard pass good for a touchdown, the Tynes kick was good and now score read 31-21. But Catholic came right back and responded with their own scoring drive and in less that a minute later added on to it’s lead at 38-21.

The Bears continued to compete and stay in the game, as Clay Embry scored the next TD for the sprinting twenty-five yards after the catch, the Tynes kick was no good. Score 38-27 Catholic, with 2:09 remaining. The onside kick was recovered by the Aces, and Catholic would add one more score with 1:55 to go, your final score 45-27. Owensboro Catholic now (12-0) will advance to the next round of the playoffs to face the Murray HS Tigers.  Catholic, the 2010 Class 2A State Runner up, falling in the championship game to Newport Catholic Central 42-0, hopes to get back to the title game for 2011.  The Class 2A Finals will be held @ WKU on Friday, Dec. 2.

The Bears finish the 2011 season with a (8-4) overall record, (3-2) in district play which gave them the #3 seed going into the playoffs.  Note the vast improvement over the (2-8) record of 2010. This is a credit to the young men of this squad, and the coaching staff for their tireless efforts in offseason commitment and preparation; leaving it all on the field every Friday night.  As all seasons go, this marked the final BCHS football game for the seniors, they are as: Jacob Oliver, Clay Embry, Matt Renfrow, Caleb Parks, Tanner Shain,  CW Decker, Tyler Cox, Zach Peach, Dillon White, Jared Brosnan, and Cole Tynes.


Here is a quick look at the stats of the Owensboro Catholic/ Butler Co. game.