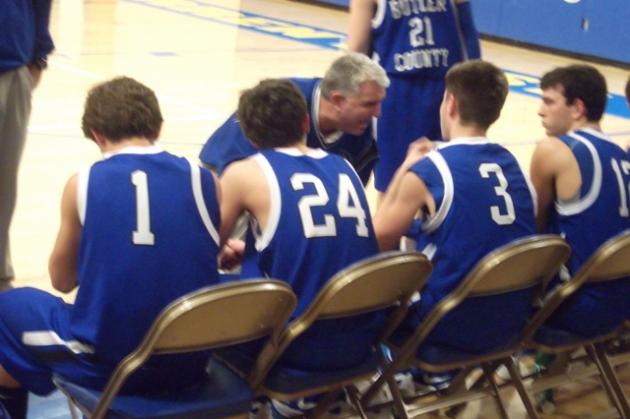 The Butler County Bears traveled up the Natcher Parkway on Tuesday night to Bowling Green to take on the Blue Raiders of Warren East High School. The Raiders are yet another team that Coach Greg Woodcock added to the schedule this season to test his Bears against tougher competition. The Raiders have a high speed, up and down the floor attack this season and feel like they have a chance to compete with Warren Central and Bowling Green High for a possible shot at going to the 4th Region Tournament.

The Raiders showed early on just how fast their attack can be. Super quick senior Adarius Barnett led a pressing man-to-man defense that gave the Bears trouble early. Fellow senior Tadd Dunn was able to score early and often on the Bears, helped out by 6’8” senior center John Bootz the Raiders opened up an early 7-2 lead on BCHS. The Bears fought back in the period behind Elijah Flener’s 6 points, and strong play off the bench by Jackson Washer. Washer came into the game and grabbed two key rebounds and also netted two assists to Flener and the Bears trailed only 15-11after a period of play.

Trevor Jenkins warmed up for the Bears in the second period. Jenkins connected on two three pointers. The second three was from near 22 feet, bringing the Bear fans to their feet and shifted momentum briefly in favor of the Bears. However the senior laden Raider ballclub responded. Chase Bryant added a three of his own and two baskets underneath to settle the Raiders and Dunn continued to score almost at will on the Bears. At the halftime break the Raiders led 29-20.

The Bears were able to use a balanced attack to challenge the Raiders coming out of the break. The third period saw six different Bears in the scoring column as BCHS moved the ball around and worked to find seams in the Warren East press. Much to the chagrin of BCHS and their good complement of fans in attendance the Raiders’ Dunn and Bryant were still able to put the game away for good in the period. The duo combined for 14 of their team’s 17 points in the period and the lead grew to 46-32 at the end of the period.

The Raiders put on one more hard press to open the quarter and completely stymied the Bears ability to get the ball into their end of the floor. Dunn, Bryant, and Bootz played half the period each before yielding to younger players for the last four minutes of the game. The final score was 66-40 in favor of Warren East.

The Bears will be back in action on Friday night for a boy/girl doubleheader on the road at Whitesville Trinity High School. Both games will be broadcast live on Beechtree Radio WLBQ 1570 AM and on Beechtreenews.com. Coverage will begin at 5:45 with the Beechtree News pregame show. Tipoff of the opening game will be at 6:00.