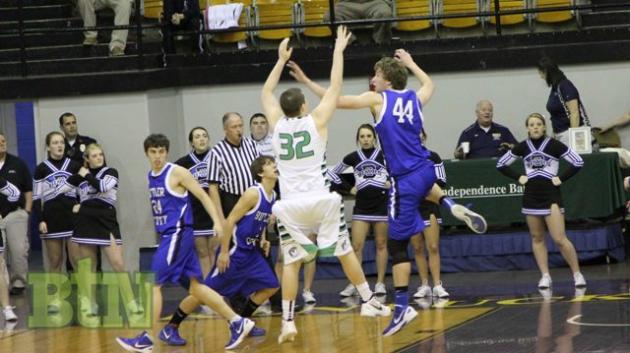 The boys’ basketball team from BCHS traveled to the Sportscenter in Owensboro on Thursday night for the opening round of the 3rd Region Basketball Tournament. The Bears had a tough matchup with the Green Wave of Meade County. The game would be a final goodbye for four BCHS seniors; players Dylan Goodall and Lucas Bratcher, and cheerleaders Jailyn Oaks and Raven Brooks.

The game opened with BCHS playing hard and looking determined to extend the careers of the seniors. Trevor Jenkins had five points in the first quarter as the teams had a defensive battle. Jenkins was also strong on the glass in the opening period, grabbing four rebounds and a blocked shot as the Bears opened up a 9-8 lead after the first.

However things didn’t continue to go well for the Bears, thanks to a couple of Wilsons, and the Garris brothers, sons of Meade County Coach Jerry Garris. Meade County turned up their defensive pressure in the second period, and senior Bo Wilson stepped up for the Green Wave. Wilson had 13 of his 17 first half points in the second quarter, and the Garris brothers, Bryce and Chase, combined for five steals as the Green Wave outscored BCHS 30-17 in the period to take a 38-26 lead into halftime. For Butler County Zeke Woodcock paced the Bears with a strong second quarter, hitting 7 out of 8 free throws in the period on his way to 10 points in the first half.

The second half opened with a quick BCHS basket, followed by a 7 point spurt from the Green Wave. The tone of the second half was set early as the Meade County boys hit three quick three-pointers and outscored the Bears 28-17 in the third period to put the game away.

BCHS was led in scoring by Elijah Flener and Trevor Jenkins who each had 12 points. Meade County put four players in double figures led by Bo Wilson with 24 points.

The Bears end their season 11-20 and lose seniors Dylan Goodall and Lucas Bratcher to graduation.