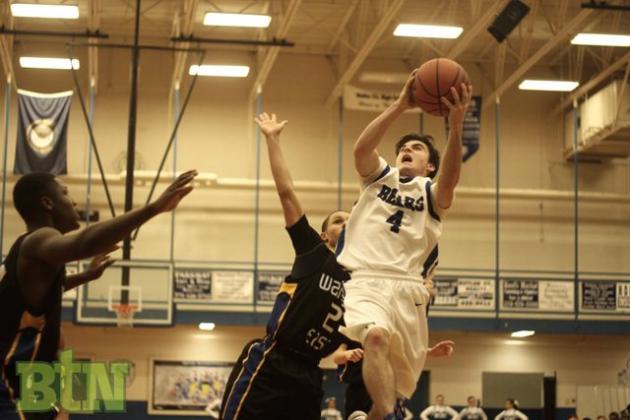 In what was a light one-game schedule, the Butler County Bears dropped a 79-73 home decision last week to the Warren East Raiders.

A slow first quarter put the Bears in a nine-point hole, trailing 19-10 at the end of the first quarter.  Zeke Woodcock nailed a half-court three pointer at the buzzer to get the deficit to single digits.

A variety of Butler County players got in the scoring column in the second quarter - Elijah Flener, Drew Henderson, Zach Burden, Brandon Thomas - but the Bears trailed 41-28 at the half.

Butler's Alex Hall turned in a strong third quarter performance, accompanied by a Trevor Jenkins three-pointer, to help keep the Bears in the game at 54-46 going in to the final quarter.

Butler County outscored the Raiders in the third quarter 18-13 and did the same in the final quarter 27-25 but couldn't pull ahead.   The Bears cut the lead to six on an Elijah Flener three; cut it further to four at 74-70 on basket and free throw by Hall; and finally got to within three at 76-73 on a Hall three-pointer late in the game.  Warren East hit enough free throws down the stretch to hold on to the 79-73 win.

Alex Hall was named the BtN/WLBQ Player of the Game for his performance, which included nine points and six rebounds.

Butler County (1-3) will be back in action on Tuesday night, December 11, in a 12th District game against Whitesville Trinity. JV will tip at 6 p.m. with the varsity to follow at approximately 7:30 p.m.