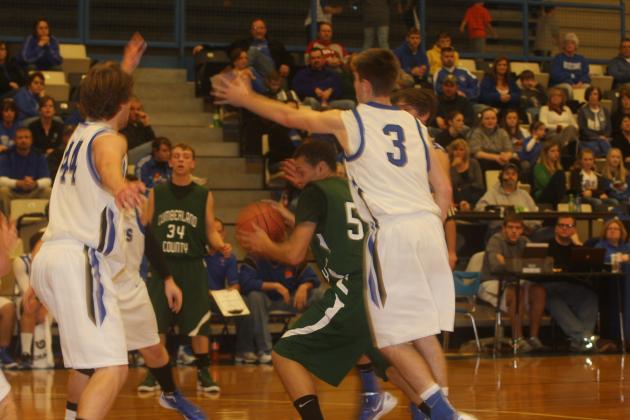 Elijah Flener and Zeke Woodcock picked right up where they left off Friday night in an overtime win over South Warren High School. Aggressive play by Flener and Woodcock put the Bears up 12-10 after a period. Trevor Jenkins starred for the Bears in the second period. Jenkins hit three straight three-point goals before Cumberland County started keying on the big man. When they did Woodcock and Lucas Bratcher combined for six points to end the period, and send BCHS to the locker room with 29-28 lead.

Coach Greg Woodcock brought out his Bears in a man-to-man to open the second half, and the defensive pressure put the Bears up for good. The Bears got 7 points from Flener and 6 from Jenkins in the period and opened up a lead on the Panthers. The score after three periods was 47-36. Brandon Thomas helped the Bears open up a 22 point lead in the fourth quarter with his nine points in the period. Jenkins added six for the Bears as BCHS powered away from Cumberland and won easily 70-54. The win is the seventh of the season for the Bears, and their third in their last four games. The Bears have only one game this week, a Tuesday night matchup at Ohio County.

The Lady Bears will have a full week of games beginning Monday night at Daviess County. The Lady Bears will take on the 13-8 Lady Panthers at 7:30. On Thursday night the Lady Bears host the Lady Eagles of Ohio County High School at 7:30, and on Saturday host McLean County in a rare 4:00 Varsity Game. All four BCHS basketball games this week will be broadcast on AM 1570 WLBQ and on Beechtreenews.com by clicking on the radio button at the top of any page.