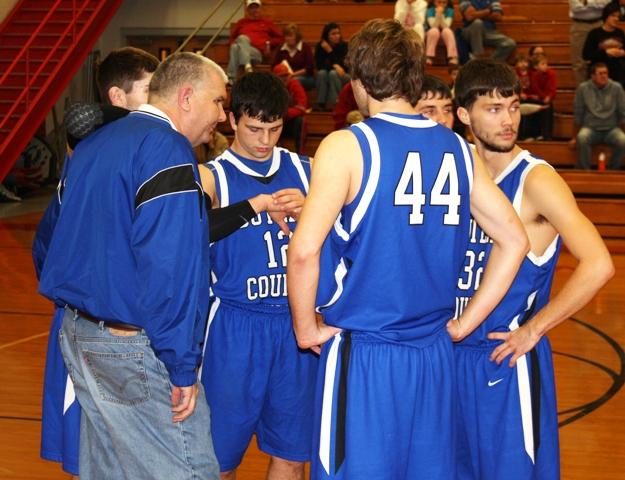 The Butler County Bears were riding a three-game winning streak on Friday night when they took the ride to Hawesville in Hancock County to take on the homestanding Hornets. The Hornets and head coach Scott LaMar learned just minutes prior to taking the floor on Friday night that they would be without the services of their leading scorer Christian Nelson. Nelson had been playing with a badly broken nose for the Hornets and had to take himself out of the lineup because of severe pain. That meant that Austin Ramey would be called upon to lead the Hornets.

Ramey was able to hit a three pointer and a layup for the Hornets early in the contest to stake his team to an early lead. For BCHS the strain of playing three games in four games was starting to show. Playing flat-footed on both ends of the floor the Bears had little energy and failed to execute their offense. With Coach Greg Woodcock extolling his players to move without the ball on offense the Bears were plagued with turnovers and trailed 18-5 after the first period. Meanwhile Ramey was a one-man wrecking crew for the Hornets. The junior had 16 points at halftime to lead all scorers, but the Bears managed to slow the HCHS attack in the second half and were very much in the game at halftime down 26-12. The Bears were led in the first half in scoring by Trevor Jenkins and Jackson Washer with three points each.

The Bears seemed to have found some energy at halftime when the second half started. HCHS scored early to start the half, but the Bears managed to trim into the lead and got the lead under ten at 29-20. Then a bizarre series of events unfolded that started unravelling the Bears’ plans for good.

The Bears started using a full court press to open the half with instant results. HCHS struggled to break the pressure without their starting point guard and momentum shifted to the visitors. With less than three minutes remaining in the third period, following a Bears layup Dylan Goodall fouled Austin Ramey on the inbounds play. After the foul Goodall allegedly threw a punch at Ramey, causing the Hancock County player to throw a wild haymaker punch at Goodall in return. Junior Brandon Thomas acted quickly to get between two players and usher Goodall to the BCHS bench. The three-person officiating crew then huddled at the free-throw line for several minutes before going to the official scorers to explain the infractions. Goodall was called for a personal foul for a hold on Ramey on the inbounds play. Additionally Goodall and Ramey were both assessed personal fouls for throwing punches. Technical fouls count toward a player’s personal foul totals, and that meant that Goodall was disqualified from the game for having five personal fouls.

With the situation seemingly calmed down Austin Ramey went to the line where he hit both free throws stemming from the personal foul. Coach Scott LaMar then brought in a substitute from the bench to shoot the two technical foul free throws. Several members of the BCHS coaching staff and fans started boisterously protesting the substitution. The rules of basketball state that technical foul free throws must be shot by a player on the floor at the time of the infraction. With Hancock’s Wynn about to shoot the free throws BCHS assistant coach Chad Flener yelled toward the referees, “He can’t shoot those, you don’t even know the rules.” Before Wynn could shoot the official that had allowed Wynn to go to the line stopped play again and approached the BCHS press section where Coach Flener and the Beechtree Radio broadcasters were seated. The official asked who had made the remark prompting Flener to admit he had said it. The official then asked Hancock County officials to bring in game management, and he informed the scorer that Flener had been ejected from the game. Flener was then escorted from the arena by a deputy from the Hancock County Sheriff’s Department.

When play resumed officials conferred briefly and concurred with Flener’s assertion that Wynn could not be brought into the game to shoot the free throws. Austin Ramey was sent back to the line where he hit both shots. Zeke Woodcock then hit one of two technical foul shots for the Bears. The Hornets were awarded the ball and after doggedly running their offense for almost a minute Ramey broke free on the wing to hit his fifth three-pointer of the contest. The 7-1 points swing broke the BCHS momentum, and although the Bears cut the lead to six in the fourth quarter the outcome was never really in doubt after the exchange late in the third quarter. Austin Ramey never cooled off for the Hornets, pouring in 39 points for the game, including 23 in the second half. The final score was 71-53 in favor of Hancock County.

The Bears will be in action next week in the Carroll Classic in Carrolton, KY. Beech Tree News will have correspondents at all the games to send back photos and stories from all the games.

Submitted by Sasha Goodall (not verified) on Mon, 19/12/2011 - 7:56pm
Before posting these articles, you should get the facts correct. If you want to rewatch the game go to ihigh.com and view the game. There were no punches thrown by either Ramey or Goodall. Goodall had possesion of the ball and Ramey pushed him down. Also COACH WOODCOCK agreed that Dylan did not deserve the technical because there were no punches thrown. If Butler County would support Butler Co in basketball and take up for the players this wouldnt happen in the games. I feel that its ridiculous that the Butler County parents and newpapers are writing rude things about our own players. Not only rude, but false articles. Butler County could have a great team if everyone would just support us.