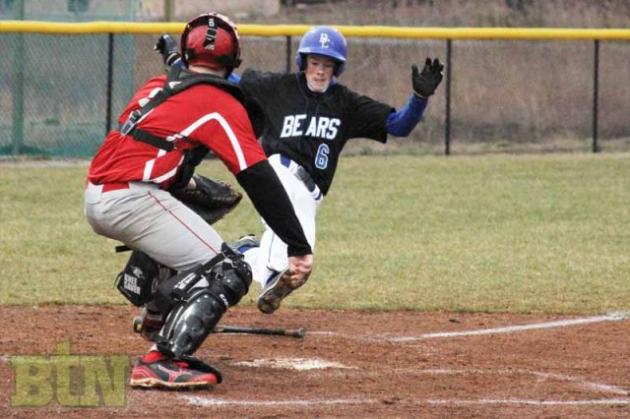 The Butler County Bears Baseball team faced off against McLean County in their first game of the 2013 season on Saturday, March 9, in a varsity/JV doubleheader.  The contest marked the first time the two teams have matched up since 2009 where the Bears suffered a defeat of 10-0.  Butler County was looking for redemption on Saturday.

Caleb Hunt was the starting pitcher for the Bears with a 12:00 p.m. first pitch.  Hunt threw a solid game and ended up lasting all 7 innings, throwing only 74 pitches.  Hunt only allowed 2 hits, 1 earned run, and struck out 7, and walked no batters on the day.

Despite a great defensive effort, the Bears were unable to put up big numbers offensively.  BCHS struck only 4 hits on the day.  Three of the four hits were singles from Trevor Parker, Carrington Harpe, and Brandon Jones.  Elijah Flener came up big with a hard hit double and drove in the Bears only run of the afternoon.  One RBI proved not to be enough for the Bears and they suffered a defeat of 2-1.

In JV action the Bears came up victorious with an exciting 4-3 walk-off win.  Blake Graham drove in the winning run while Ty Burden picked up the win on the mound.

BCHS was back in action on Thursday at home picking up a win over Todd County Central.  On Friday and Saturday the Bears varsity traveled to play in the South Warren Lead-Off Classic, facing South Warren, Allen County, and Owensboro.   Stay connected to BtN/WLBQ for games stories to be posted soon.