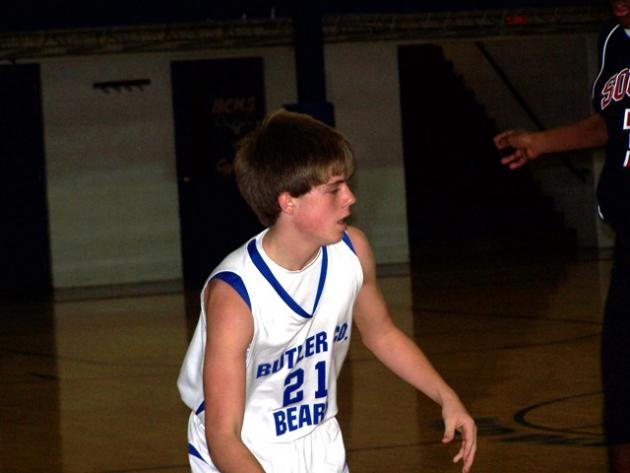 It wasn't pretty, but they got the job done.  That just about sums up this weeks' basketball action for the BCMS boy's basketball team.  The Bears only match up this week was at home against Edmonson County.  This wasn't the first time these two teams had met this season.  Butler County traveled to Edmonson County early in November for their season opener.  At their first meeting, the Bears handily won both games beating their 7th grade team by 17 points and their 8th grade team by 34, but that wasn't quite the case this time around.  The 7th grade team was slow out of the gate offensively and, even though they attempted to score several times, it just wouldn't seem to fall.  The Bears found themselves down by 2 at halftime with a score of 21 - 23.  It wasn't until that magical 3rd quarter that the 7th grade seems to love that they stepped up their defense and finally found the basket and were able to convert outscoring the Wildcats 17 - 2.  Blake Graham's (17 points) and Rex Henderson's (15 points) double digit scoring in the game gave the Bears the edge they needed in the end to pull out the win with a score of 44 -35.  Also scoring for the Bears in the 7th grade game were Bailey Anderson (4), Kaleb Casey (4), Kyle Casey (2) and Ty Burden (2).

Although the 8th grade came out of the first quarter with a lead 11 - 5, they just didn't seem to be on their game either.  The 8th grade team seemed to have many of the same woes as the 7th grade team with the basketball just not wanting to go through the basket.  Fortunately for the Bears, the Wildcats seemed to have the same problem.  The Bears went into the locker room at halftime with a slim 3 point lead 16 - 13.  Throughout the entire game the Wildcats never seemed to go away and the Bears couldn't put them away.  Rodney Woosley came up with some key steals in the second half to keep the Bears in the lead.  Butler County squeaked away with the win 40 - 37,  beating the Wildcats this time by 3.  Top scorers for the Bears were Rodney Woosley and Rex Henderson with 10 points each.  Others scoring were Blake Graham (8), Dallas Miller (7), Bailey Anderson (3) and Jacob Hixenbaugh (2).

Next week the Bears will be making up for lost time this week with a packed schedule.  On Tuesday, they will be at home against Breckonridge County.  Thursday, they will travel to Hancock County.  Friday and Saturday they will be in a tournament at Adairville.