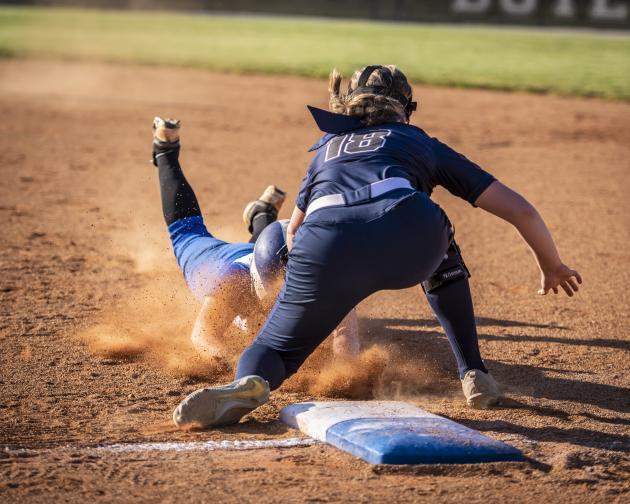 Chaney  Drives in Five to Butler County Victory Over Grayson County
Butler County defeated Grayson County 12-1 on thanks in part to Hannah Chaney, who drove in five runners. Chaney drove in runs on a home run in the fourth and a home run in the fifth.
In the first inning, the Bears got their offense started when Bayleigh Alford singled on a 2-1 count, scoring one run.
Butler County tallied five runs in the fourth inning. Chaney and Ashley Thacker all contributed in the big inning with RBIs.
Kylee Smith led the Butler County to victory in the circle. She went five innings, allowing one run on three hits, striking out five and walking zero.
The Bears hit two home run on the day. Chaney had a long ball in the fourth and fifth innings.
Butler County saw the ball well today, racking up 13 hits in the game. Dixie Garnier, Autumn Proctor, Alford, Thacker, and Chaney all collected multiple hits. Proctor and Garnier each collected three hits to lead Butler County. The Bears was sure-handed and didn't commit a single error. Chaney made the most plays with five.

Butler County  Blows Out Todd Central
Butler County blew out Todd central 9-3.  The Bears got on the board in the first inning when Hannah Chaney doubled on a 2-2 count, scoring one run.   The Bears tallied three runs in the fourth inning. Chaney, Bayleigh Alford, and Aleace Hall all contributed in the big inning with RBIs.
Kylee Smith was credited with the victory. She went seven innings, allowing three runs on five hits, striking out four and walking zero.   Butler County scattered 11 hits in the game. Aubrey Clark, Chaney, and Autumn Proctor all managed multiple hits. Clark went 3-for-4 at the plate to lead the Bears in hits.
.

Bears 14 Grayson 4
Butler County managed through a push by Grayson County in the third inning where they coughed up coughed up three runs, but the Bears still won 14-4.   In the first inning, Butler County got their offense started when Hannah Chaney homered on the first pitch of the at bat, scoring two runs.
Kylee Smith was the winning pitcher for the Bears. She lasted five innings, allowing five hits and four runs while striking out three and walking zero.
Butler County hit one home run on the day. Chaney had a homer in the first inning.
The Bears racked up 13 hits in the game. Autumn Proctor, Bayleigh Alford, Ashley Thacker, and Dixie Garnier all managed multiple hits. Proctor went 3-for-4 at the plate to lead Butler County in hits.

With Smith On The Mound, Butler County Shuts Out Edmonson County
Kylee Smith shut down Edmonson County, throwing a complete game shutout and leading Butler County to a 10-0 victory.
In the first inning, the Bears got their offense started when Dixie Garnier doubled on the first pitch of the at bat, scoring three runs.
Smith got the win. She lasted five innings, allowing three hits and zero runs while striking out four and walking zero.
Butler County hit one home run on the day. Autumn Proctor went deep in the fourth inning.
The Bears collected 11 hits. Aubrey Clark, Ashley Thacker, Proctor, and Amber Thacker all managed multiple hits. Thacker, Proctor, Thacker, and Clark each managed two hits to lead Butler County.  The Bears was sure-handed and didn't commit a single error. Hannah Chaney made the most plays with four.

Butler County Bears Varsity Blows Out Breckinridge County Thanks to Big Third Inning
Butler County defeated Breckinridge County 9-1 thanks to a timely five runs in a big third inning. Hannah Chaney, Bayleigh Alford, Aubrey Clark, and Haley Peach each had RBIs in the frame.
Kylee Smith was the winning pitcher. She lasted seven innings, allowing five hits and one run while striking out five and walking zero.
Butler County saw the ball well, racking up 12 hits in the game. Alford, Olivia Austin, and Chaney each racked up multiple hits . Chaney, Austin, and Alford all had three hits.

Butler County  Loses Lead Early in Defeat
Butler County Bears Varsity watched the game slip away early and couldn't recover in a 12-1 loss to Ohio County. Ohio County scored on an error, a single, and an error in the first inning.
The Bears struggled to put runs on the board and had a tough time defensively containing Ohio County, giving up 12 runs.  Kylee Smith took the loss for Butler County.
Autumn Proctor and Dixie Garnier all had one hit to lead Butler County.