BCHS September 2011 Students of the Month 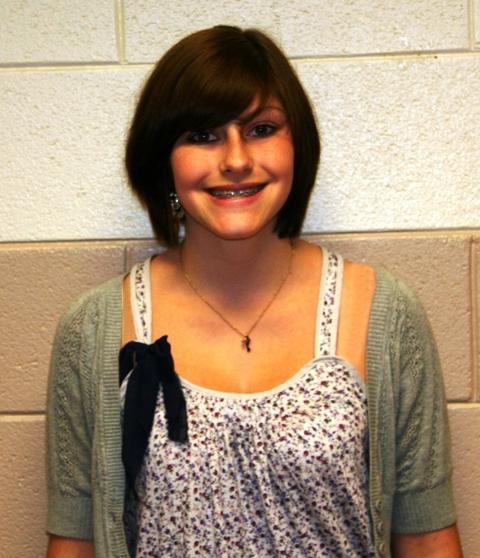 Four Butler County High School students have been recommended by faculty/staff members for September student of the month honors based on attendance, promptness to class, participation in class, grades or attitude.  These students are Abby Mencl, Josh Henderson, Hollie Coleman and James Smith.

Abby Mencl(pictured above) is the 9th grade daughter of Kathy Boord.  She participates in FCCLA, Academic Team and Beta.  She also enjoys reading, listening to music, talking, tutoring and having fun.  Her future plans are to attend college and become a successful business woman.

Josh Henderson is the 10th grade son of Tammy Henderson and Paul Henderson.  He participates in FFA.  His future plans are to professionally ride four-wheelers.

Hollie Coleman is the 11th grade daughter of Renee Coleman and Michael Coleman.  She participates in band, HOSA, Beta, FCCLA, Science club, Rocket team and Pride.  Her future plans are to become a dentist.

James Smith is the 12th grade son of Jennifer Tosi.  He participates in Gamer’s club and Academic team.  His future plans are to attend college and focus on writing.

Congratulations to the September Students of the Month at Butler County High School!