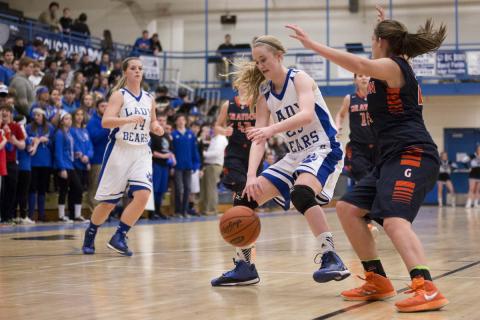 With an unexpected week off due to snow and the regular season coming to an abrupt end, both the Butler County Bears and Lady Bears now have their sights set squarely on the post-season.  In Kentucky, that means it's time for the district tournament.

The 12th District Boys' and Girls' basketball tournament will begin this week at Edmonson County High School.  Pushed back a day due to inclement weather and game cancellations last week, the girls' tournament will get underway on Tuesday, February 24.

The two teams split during the regular season - each winning on the other's home floor.  Edmonson defeated Butler 61-47 on January 2 at Morgantown.  The Lady Bears got revenge a month later on February 2 with a 69-66 overtime win over the Lady 'Cats at Brownsville.  Butler County tied with Edmonson County as to which team would be the higher seed. Edmonson County won the coin toss and became the #2 seed, making the Lady Bears the #3 seed.

The Bears dropped both regular season games to the Wildcats this season - a 64-54 loss at home on January 2 and a slim 62-61 defeat on the road on February 2.  Butler County tied with Whitesville Trinity for the #3 seed.  The Bears lost a coin toss and became the #4 seed as Trinity took the #3 seed.

The 12th District Boys' Championship is schedule for Friday, February 27, at 7 p.m.