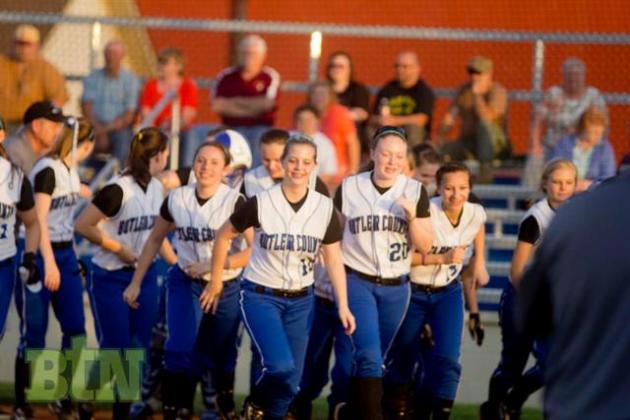 The Butler County High School Bears softball team made it three in a row on Tuesday night with an 8-2 home win over University Heights Academy.  The win was the third consecutive for the Bears, who defeated Logan County 10-0 on Monday night and Barren County 7-2 on the previous Friday.  Butler County (6-4) hit the road on Thursday to participate in the Oldham County Spring Break Classic.

Pitcher Morgan Manning earned win in the circle.  She allowed six hits, one earned run, struck out five batters, walked one and hit one.

In another bit of bad luck for Butler County, third baseman Lynsie Clark was injured with a broken bone in her hand during a play at third.  Clark was making her first full start back from a broken foot injury sustained during basketball in December.  This injury will sideline her for 4 to 6 weeks, making her return status questionable.

Against Logan County, the Bears pounded out 11 hits in the five-inning win.   Amy Rogers led the way with a 4 for 4 performance, including two doubles, two singles, and three RBI.  Others recording hits were Hannah Peach (1B, 2B, RBI), Natoshia White (2B, 1B, 2-RBI), Madeline Drake (1B), Morgan Manning (1B, RBI), and Jazmin Reynolds (1B).

Manning allowed four hits, no runs, struck out four batters, and walked none.

On Tuesday, Butler County used a 12-hit attack for the win over University Heights Academy (UHA).  Amy Rogers had another strong offensive game, going 3 for 3, with a double and two singles.  Also hitting safely were Morgan Manning (2B, 2-1B, 3-RBI), Natoshia White (2B, 1B, 2-RBI), Hannah Peach (2B, 2-RBI), Madeline Drake (1B), Payton Grubb (1B), and Emily Rich, in a pinch-hit opportunity, had a single with a RBI.

"We've been playing much better lately, much more consistently, especially at the plate," said BCHS head coach John Embry.  "We have shown a little more patience at the plate and it shows with then number of hits we've logged the last few games."

Butler County will play Mercer County at 7 p.m. on Friday night in the opening round of the Oldham County Spring Break Classic.

Kassie Phelps allowed only one hit and struck out 8 of the 15 batters she faced.

Natoshia White earned the win in the circle.  She allowed nine hits, three earned runs, had five strike outs, and hit one batter.