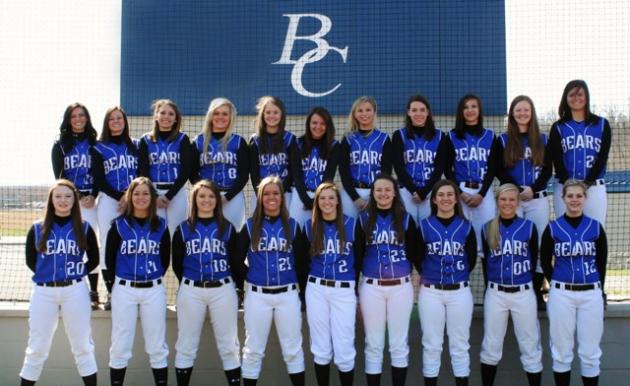 The Bears fell behind 3-0 early before rallying to tie the game 3-3 in the 5th inning.  With two outs in the inning, Jazmin Reynolds reaches base on an error; Amy Rogers then singles and Madeline Drake took advantage of another Apollo defensive mistake to load the bases.  Natoshia White then rocketed a 3-2 pitch over the head of the E-Gal right-fielder to clear the bases and tie the game at 3-3.

Apollo answered in the bottom of the 5th inning, scoring one run on four hits to retake the lead at 4-3.

For the remainder of the game, Butler County's defense stepped up repeatedly with big plays each time Apollo threatened.  Also, Butler County junior pitcher Morgan Manning turned in a solid performance, especially during the late innings, getting stronger as the game went longer.

Trailing by a run in the top of the 7th, Butler County was down to its final three outs. Junior left-fielder Payton Grubb doubled to left field to start the inning.  Reynolds laid down a running sacrifice bunt to advance Grubb to third.  Rogers singled to right field to drive home Grubb and tie the game at 4-4.  An Apollo double play ended the Bears' efforts to take the lead.

The 8th and 9th innings were relatively quite for both teams but the 10th proved to be the game changer.  Kentucky High School Athletic Association (KHSAA) rules mandate the implementation of the international tie-breaker rule with the game is tied after nine innings.  During tie-breaker play, each team starts with a base runner at second base — the player who made the last out the previous inning.  For the Bears, that put Amy Rogers at second base with Madeline Drake at the plate.  Drake grounded out to second but advanced Rogers to third.  White and Graham are both walked to load the bases.  Morgan Manning hits an infield ground ball (fielder's choice) but Rogers is able to beat out the throw on a close play at the plate to give Butler County a 5-4 lead.

Apollo threatened in the 10th, advancing their baserunner to third on a sac bunt.  Grubb then made nice catch in left field on a well-hit ball.  With two outs, Manning came within inches of game-winning strike out but didn't get the call.  But, the next play went the Bears' way as shortstop Madeline Drake snagged a hard line drive to end the game.

Morgan Manning earned the win in the circle.  She pitched all ten innings, allowed 13 hits and four earned runs.  She struck out four batters, walked one and hit one.

Butler County softball will be back in action tomorrow at Muhlenberg County and will play at Owensboro on Tuesday.  Game games are scheduled to start at 5:30 p.m. The varsity game is first with the JV game to follow.