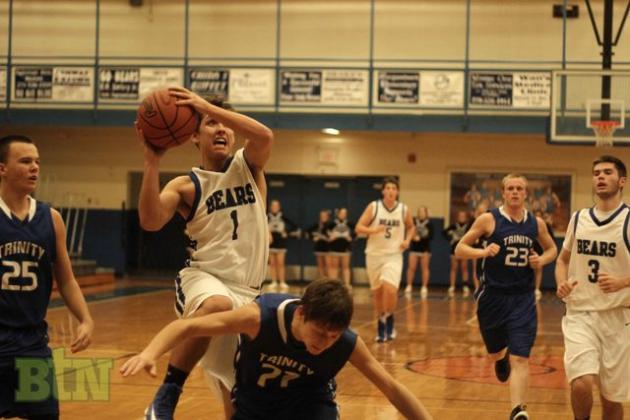 "It's very important," said Dockery, referring to his team's top ranking in district play.  "During preseason the guys made a list of goals and winning the district was at the top of the list.  They just needed some confidence in their ability individually and collectively."

Butler County actually fell behind a scrappy Trinity team early in Tuesday's game and trailed 21-18 at the 7:20 mark of the first half. Baskets by Trevor Jenkins and Rex Henderson narrowed the deficit to one and a free throw by Henderson tied the game at 25 apiece.   From there, the Bears took control of the game, outscoring the Raiders 17-3 over a four-minute period.  The scoring flurry was led by Zeke Woodcock, who chipped in eight points during the run, and three pointer by Alex Hudnall.  By halftime, the Bears had turned a slight first-quarter deficit into an 11-point margin.

Baskets by Jenkins, Brandon Thomas and another three by Hudnall, as the third quarter buzzer sounded, gave the Bears a 59-34 advantage.  Butler County maintained that lead in the fourth with multiple baskets by Alex Hall, as well as strong bench scoring from Henderson, Matt Moore, Zach Burden, Jared Rose, and Tyler Clark.

Agaisnt Edmonson County on Thursday night, it was all Butler County as the Bears rolled to a 25-8 first quarter lead and a 38-23 halftime margin.  Butler County blew the game open in the third, outscoring the visiting Wildcats 22-6 to take a commanding 60-29 lead going into the final quarter.  The Bears cruised to a 74-51 win.

Overall, Coach Dockery is excited about how his team has performed thus far.

"I am pleased," said Dockery.  "We understand that there are a lot of games to play and we want to improve possession by possession."

The coach is optimistic about his team and is looking for continued improvment.

"The kids are buying in as they see the success that comes with attention to detail, especially on defense," said Dockery.  "We have a very demanding schedule and have some very talented teams left to play it will be a challenge our goal is just to continue the progression."

Butler County (3-3, 3-0) hosts Hancock County on Friday night.  The JV game is set to tip at 6 p.m. with varsity action to follow.