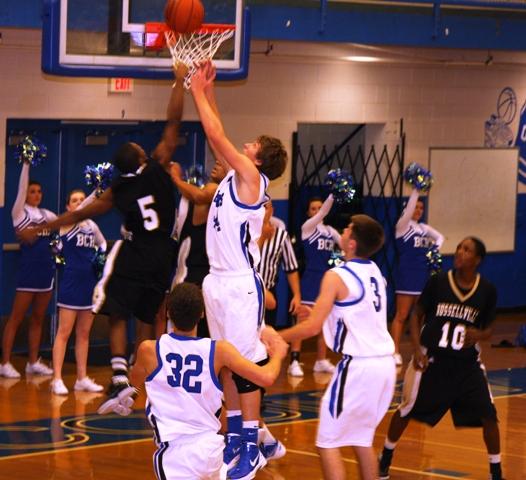 The Butler County Bears returned home on Saturday night to take on the visiting Panthers of Russellville High School. Both teams came into the game winless on the young season and were hungry to grab a victory. The home crowd was treated to an entertaining game which saw four ties and five lead changes.

Russellville jumped on top early led by Zach Hines and Derion Calloway. The duo used their blazing speed and athleticism to open up a 4-0 lead early before Butler County’s Lucas Bratcher answered for the Bears. At one point in the first period Russellville led the game 8-6 with all the BCHS points belonging to Bratcher. Behind Bratcher’s strong play and a balanced team attack the Bears were able to take the lead with under a minute to go in the period. With the crowd behind the home team the Bears led 13-12 after a quarter of play.

Russellville’s Davis Pardue started to warm up in the second period. Pardue is the team’s outside shooting threat and nailed two long jumpers before going to the bench with foul trouble. Elijah Flener and Trevor Jenkins found ways to score for Butler County despite a strong inside game for Russellville as the teams traded the lead twice in the quarter. At halftime the Bears trailed by only a point at 23-22.

The third quarter saw the two teams go in decidedly different directions. Russellville found their second wind at halftime and quickly ran out to a 34-24 lead after halftime. Calloway and Hines used their superior speed to simply run away from the Bears. On the other end of the floor the Bears were finding their way to the basket, but were unable to convert. Making matters worse the Bears were completely stymied at the free-throw line, shooting a miserable 11-out-of-25 for the game, including going 6-out-of-15 in the second half. The Bears managed only 7 points in the 3rd period and saw the Panther lead grow to 40-29 after three periods.

Down eleven points the Bears refused to back down. Trevor Jenkins found his range to finally connect on two three pointers in the period, and Jackson Washer chipped in four points in the paint as the Bears cut the Panther lead to four on three different occasions. Coach Davis Pardue, Sr. was forced to call multiple timeouts to manage his personnel with several key players in foul trouble. However the unravelling of the BCHS comeback was free-throw shooting. The Bears missed key free-throws which allowed Russellville to nurse their lead. In the end the Bears fell to the Panthers 58-48. Derion Calloway led all scorers with 17 points. Trevor Jenkins and Lucas “Taco” Bratcher each had 12 for the Bears.

The Bears, 0-3 (0-1), will next travel to Bowling Green on Tuesday night to take on the Blue Raiders of Warren East High School. The Raiders are 1-1 after beating Metcalfe County 85-23 at home before losing a double overtime game to Logan County 90-84 in Russellville.

The Bears vs. the Blue Raiders will be broadcast live on Beechtree Radio 1570-AM WLBQ and on Beechtreenews.com. Coverage will begin at 7:15 with tipoff at 7:30.