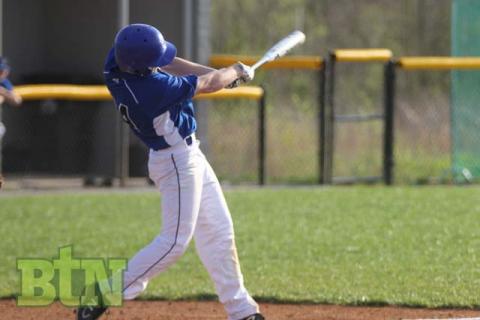 The BCHS baseball team had busy week with 3 varsity and 3 junior varsity games.  The varsity dropped a heart breaker to Greenwood on Monday night, won big 16-1 over Caverna on Tuesday night, and lost 5-1 to Warren Central on Thursday night.  The scheduled Saturday game at Logan County was canceled due to rain.

Senior right-hander Cole Tynes had his first start on the mound of the year for the Bears against the Greenwood Gators on Monday.  Coming into the game, Tynes had 6 appearances pitching, all in relief.  He pitched strong against the Gators, only allowing 1 earned run to cross the plate in his 6 2/3 innings of work.  The Bears bats also fared well at the plate, posting 4 runs. Caleb hunt lead the way offensively with 2 hits.   The Bears had a 4-3 lead in the top of the seventh inning with 2 outs and no runners on base.  After a throwing error to first base that would have ended the game, the Gators were able to rally and lead a final charge.  The Gators went on to score 7 runs with 2 outs, making the score 10-4 going into the bottom of the 7th inning.  The Bears offense was unable to respond to the Gator surge, making the final score 10-4.

The Bears JV faced off against the Gators JV following the varsity game.  The Bears JV also suffered a loss, with a score of 12-2.

Tuesday BCHS traveled to Caverna High School in hopes to rebound after the tough loss Monday night.  They did just that, scoring 16 runs, and only allowing 1 run on defense.  Caleb Hunt was the winning pitcher on the night for the Bears.  Hunt allowed 1 earned run off 1 hit while striking out 7 in 6 innings of work.  Hunt also helped himself at the plate, leading the Bears with 3 hits and 2 RBI’s.  Tyler Johnson, Cole Tynes, and Carrington Harpe also collected multiple hits in the game, with 7 Bears getting at least 1 hit.

"This was a great confidence win for us after a tough loss the night before," said Bears coach Kevin Winn.  "We look to ride this momentum into our next game, and our district games starting next week."

The BCHS JV also won big over the Caverna scoring 7 runs in 3 innings of play.  The game was called after the 3rd inning due to time limit, giving the Bears a 7-0 victory.

Thursday night saw BCHS back on the road again to face off against the Warren Central Dragons in Bowling Green.  After the big night on Tuesday, the bats for the Bears seemed to quiet down on Thursday night.  The Bears were only able to score 1 run in 7 innings of play.  Dillen White was the starting pitcher for BCHS, throwing 5 innings while giving up 4 earned runs and striking out 3.  Sophomore Caleb Hunt continued to stay hot at the plate collecting 2 hits.  The Dragons proved to be too much, winning 5-1 over the Bears.

The Bears JV faced off against the JV Dragons for the second game of the night.  In the 5-inning match-up Warren Central was able to outscore BCHS 4-1.  Brandon Jones and Blake Graham both saw time pitching for the Bears.

The Bears will be back in action on Tuesday with a home district match-up against Edmonson County.  Thursday the Bears will Travel to Glasgow to take on the Scotties, then return home to face-off again against Caverna.