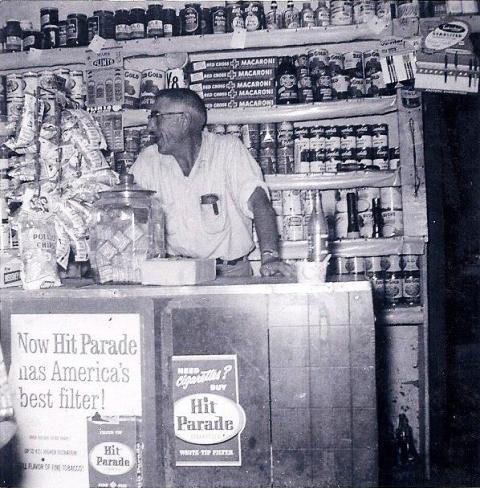 Coots Grocery in Aberdeen, Kentucky was the local gathering place of the little community in the 50's and 60's.  Otis "Pop" Coots was my Grandfather on my mother’s side of the family. He and his wife Eva Lillian (Flener) Coots, Grandma to us, lived in and operated the little grocery.  As a child I loved staying overnight with Pop and Grandma and watching the interaction of the people that shopped there and their discussion of the local news and happenings in the community. On Friday and Saturday nights Pop would tune in the old black and white TV that sat on the meat case to Friday night boxing and Saturday night wrestling.  A host of locals would drop in, grab a cane bottom chair, and cheer on the good guys and boo the villains.  Uncle Jim Burden would be there with his ear trumpet, Gordon Bond who walked or hitched a ride would usually come, Baron Felty would sometimes show up, Roy Havens and his wife were usually there.  With all available chairs taken I would often sit or lay on the large old freezer that Pop kept the frozen rolls of lunch meats in, grab a Banana flip or oatmeal cake and a cola from the single door water bath Coca Cola machine.  Tojo Yamamoto, The Fargo brothers, and a host of past wrestlers set the blood boiling with angry shouts of indignation at the blind referees who couldn't see hair pulling, log chains, thrown salt and metal chairs being used against the "good guys".  Pop stayed busy making sandwiches, selling colas, chips, cakes, and working the cash register during the commercial breaks. After the programs ended there would be discussions about local news, marriages, births, deaths, and accidents.  I recall Roy Havens who had worked with the railroad talking about the cleanups of railroad accidents that he had witnessed and or participated in.  That sort of stuck in my young mind.  Pop invariably turned the conversation to fishing or fox hunting the two things that were his passion. I don't recall Baron Felty talking a lot about his experiences but learned as time went on that he was one of our soldier heroes of World War II.  His scarred wounds told a lot. Baron had suffered from an explosion and his face was terribly scarred.  He barely survived from the terrible wounds that he suffered.  If I could turn back time I would thank him for his service and sacrifice for his country personally, but as a young child I was like most a little afraid to say anything to him.  The thing I remember most about Gordon Bond was the dark sun glasses that he always wore and that he walked everywhere he went.  I never knew if he couldn't afford a car or if he had never learned to drive one.  He was well liked by most of us at the store but always seemed to be a private person.  Uncle Jim's ear trumpet fascinated me.  He sometimes went fox hunting with pop and I watched him with the ear trumpet seeking out the baying of the hounds while we sat around the campfire. Pop had a large concrete tank by the store with an aerator in it where he kept minnows and a small net.  Each day he would feed them and remove any that had died with the net.  He also kept red worms and night crawlers in an old refrigerator and some crickets for sale as bait as well as assorted fishing gear. In a backroom pop had set up a box with a hole in it and kept a flashlight beside it.  He would shut the doors and candle eggs that he bought from local farmers to resale. He also bought round cakes of homemade butter and resold them.  When the fourth of July rolled around he always made a trip to Tennessee and came back with a supply of fire crackers to sell, with some extras that he doled out to the grandkids always cautioning us to not blow a finger off... Christmas was my favorite time of year at Pop's and Grandma Coots.  The whole family would come together uncles, aunts, cousins, and all of the family for Christmas dinner and the exchanging of gifts.  That was a special time that I will treasure and miss.  Pop would always give the kids flashlights and we would usually have the batteries run down before the day after Christmas from playing with them.  I guess Pop was ahead of his time in realizing that kids love electronic toys. When pop and grandmaw retired he sold the business to Wendell Embry and his wife who continued to run the store for many more years as Embry's Grocery.  The store later became the home of Beechtreenews.com.  I am sure Pop Coots would be proud that the little grocery that he once ran, still serves as an important source of community news and happenings in Butler County Kentucky.

Submitted by Connie Embry (not verified) on Mon, 11/07/2011 - 3:58pm
Country stores, almost a thing of the past now, but so important and memorable to us who grew up in that era. Good story Allen, and good memories for you I am sure.