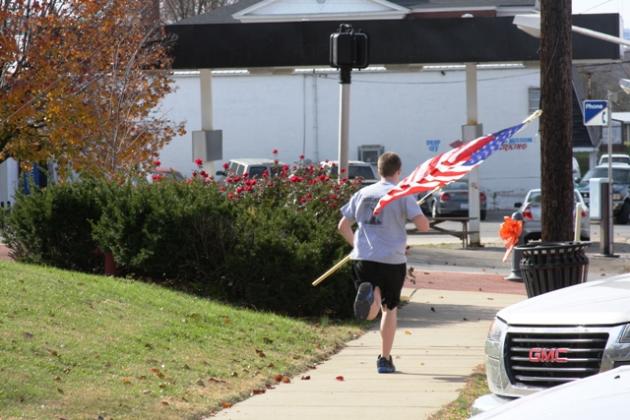 The Butler County High School NJROTC completed their 5th Annual 16-Hour Endurance Run on Saturday night at the Butler County Courthouse.  The run honoring veterans started at 7:00 am Saturday morning and continued for 16 hours covering 100 miles around the courthouse with Cadets carrying the American Flag.

All 55 cadets of the NJROTC participated in the run in different shifts.  Major Remond and Chief Melton supervised the Cadets.

Major Redmond started the run five years ago.  Redmond was one of twelve that had run the flag from Louisville to the burial site of the one of the Iwo Jima flag raisers several years ago.

“Running and carrying the flag gives you time to reflect,” said Remond. "I thought it would be a great experience for our Cadets."

Several Cadets said they were running in memory or honor of a family member in the military service.

People drove by and honked their horns; others stopped and watched for a while. Many thanked the Cadets for choosing to spend their Saturday honoring those who have served and are serving our country.

The Cadets are raising money for the Wounded Warrior Program and the Morgantown Boys & Girls Club. They will be accepting donations this week as well.

Submitted by Brenda Bacon (not verified) on Tue, 11/15/2011 - 12:32pm
Gosh! Has it really been five years?? Thanks Major for finding another way a whole community can continue to honor all veterans! Butler County is very proud of their military personnel, past and present, and rightly so.