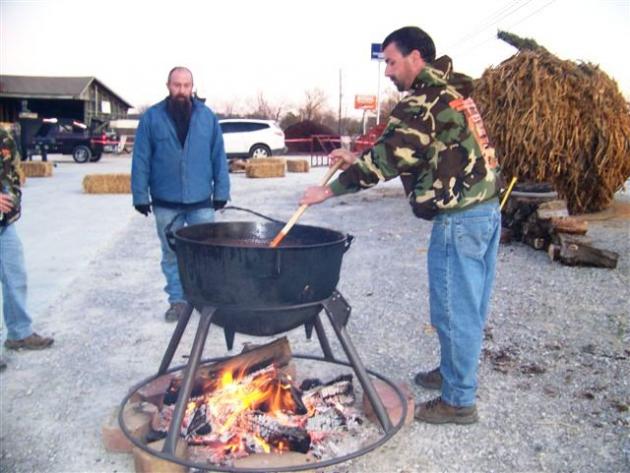 Approximately 400 people enjoyed a perfect night for a bon fire and festivities November 11, at Drake’s Farm Service Hunters’ Night Out, the night before gun season for deer began in Butler County.  There were out of state folks from Florida, Alabama, Georgia, Iowa, and Tennessee.  Everyone enjoyed Stan’s Famous Chili cooked over an open fire in a huge black kettle.

Richie Ellis provided Karaoke and several performed their singing ability, including three of Drake’s employees, Stan Farris, Caleb Smithson and Jamie Renfrow.   Pthers enjoyed Bull’s Eye and Jim’s New Life Taxidermy displays.  Ducks Unlimited also had a table at the event.  Children especially enjoyed the hot dogs and s’mores.  Approximately $2,000 in door prizes were given away, including a smoker, a Holland Grill won by Robert Coomes, and a chain saw won by Eric Elms.  Others walked away with many other prizes.  Hunting stories were swapped and everyone had just a genuine good time.  Drake’s would like to thank their customers and community for their support and a special thanks to their loyal team who helped make the event successful.  Be watching for the 16th event in 2012.